A lot of people have been fighting for Britney Spears.

The #FreeBritney movement took off when the public decided to jump in and help Britney who’s been under a long and harsh conservatorship where her father controlled her every move.

A lot of people felt really sorry for her and were outraged over how she was being treated.

After many hard-fought/lost battles to regain her freedom, a judge finally removed Britney’s father as her conservator.

MORE NEWS: Police Officer’s Suicide Note Reveals He Was an Infamous Child Serial Killer and Rapist Since the 80s

It’s only been a couple of days since Britney gained her freedom, and she’s already made what some think is a rather bizarre decision.

The first thing Britney decided to do as a “free woman” was take off all her clothes and pose “nude” on Instagram.

Breaking 911 reported that a recently ‘freed’ Britney Spears posted nude photos online Thursday, a day after a judge suspended her father, Jamie Spears, from the conservatorship controlling her life.

The pop star posted the images on Instagram with the caption, “Playing in the Pacific never hurt anybody.” 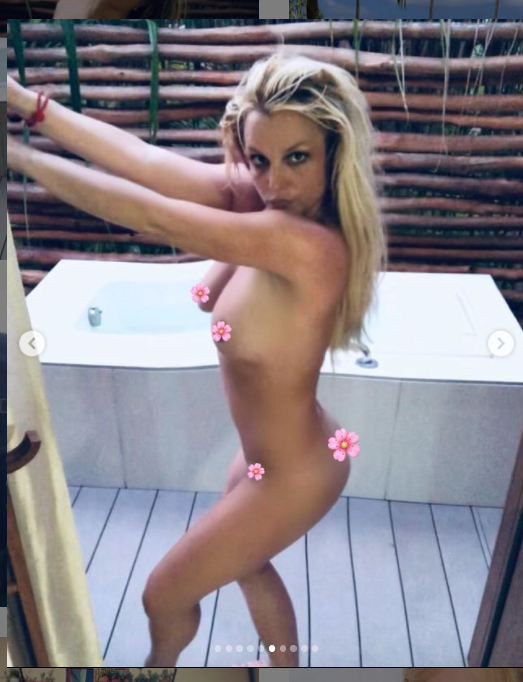 There were a lot of risque photos that Britney took and shared on her Instagram page.

Maybe this is her way of reclaiming her life? Who knows.

However, the photos are a tad strange in one particular way…

Britney claims in her Instagram posts that the photos haven’t been “edited” even though the floor and the bathtub are clearly “warping” in every photo (in different spots, mind you).

Spears claims in her Instagram post that the photos aren’t altered, it’s just that the bathtub is “curved.”

As a graphic designer, I’d have to disagree with that. These photos have clearly been altered.

The comments about Britney’s choice to post this photo are mixed:

“Oops she did it again”

“She feels free, leave her alone”

“Well that’s a interesting way to celebrate a victory. Happy for her that she’s free now.”

“eh, its her life, she can do what she wants”

“I think maybe she needed a guardian after all”

“I’m sorry, but this woman has mental issues, and anyone who doesn’t see that is crazy too”

I think Britney is indeed a troubled woman…how can you live the life she’s had and not be to a certain extent?

You just hate to see her go the “Madonna route” with bizarre photos that raise people’s eyebrows and seem a tad “off-putting.”

Let’s hope that Britney gets whatever help she needs and can enjoy her life in peace with her kids.