There’s a so-called “help wanted” ad from a paper in Wisconsin that is generating lots of buzz online. I’m assuming it’s real, based on the photo below, which clearly shows a newspaper “classified ads” section and a large “help wanted” ad with a very bold title that reads:

NO VAX – NO PROBLEM

That line right there is sure to catch a lot of folks’ attention, especially after Joe Biden enacted his boldest-ever “middle class” annihilation move – by forcing businesses with 100+ employees to force their workers to either take the vaccine or lose their jobs.

MORE NEWS: Chrissy Teigen and John Legend Threw a Lavish and Creepy “Theme Party” And Their Fans Are Furious About it

Thankfully, the 5th circuit court of appeals has put a stay on that unconstitutional medical overreach, but the fight isn’t over yet – not by a long shot.

In the meantime, some employers like this machine shop in Clayton, WI are using Joe’s unpopular mandate to hire some good patriotic people.

And this ad will probably do the trick.

Not only does this employer promise no vaccine mandates, but they also offer a great benefits package, and they proudly announce they are Trump supporters and cleverly and politely tell Biden supporters to steer clear: “Brandon lovers need not apply.”

Ha, ya gotta love the creativity. 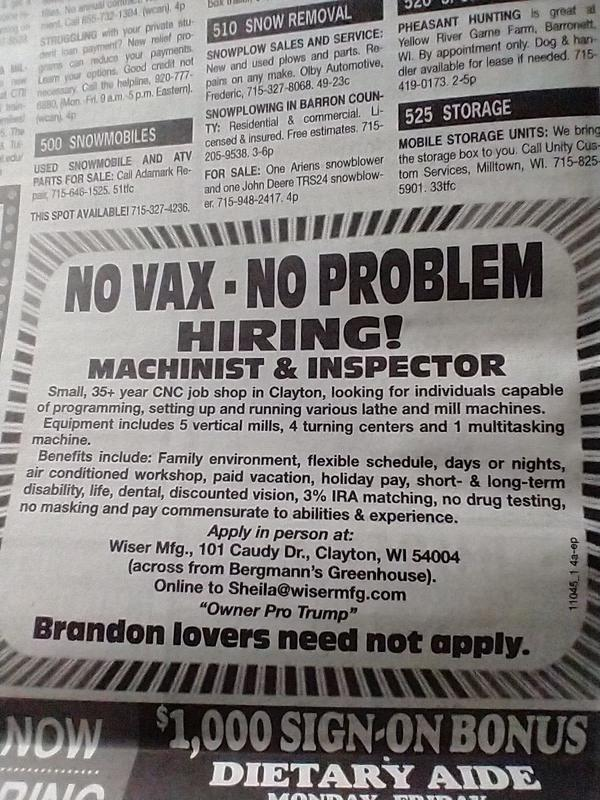 Here are some comments from folks online:

“This is the parallel universe we are living in right now.”

“Clayton is a town of about 1000 people. The neighboring towns aren’t much bigger. If you want to get away from low-IQ city folk and have a community of like-minded people this would be a good choice.”

“If I was in Wisconsin I’d apply for that in a heartbeat!”

“We need more companies doing THIS type of advertising”

” I love this. There is hope. We haven’t lost. Keep fighting”

Sometimes we forget that the kooks in this country make up about 10 percent of the population.

They’re just the loudest and have entertainment, media, and corporate behind them to amplify their very unpopular message. It’s total propaganda.

And the kooks would stop having “power” if the 90 percent stopped sitting around with their thumbs up their butts and spoke out and fought back.