If there’s one “mandate” Joe Biden had when he was installed into the White House, it was “beating COVID.”

Biden could have ridden the COVID train to some kind of “victory,” if he had played his cards right. But, he didn’t, and as with all things “Joe,” what should have been a “slam dunk,” has turned into another chaotic shambles, just like Afghanistan.

The few times Biden was carried out of his basement and set onto the campaign trail, his message was that he was going to “beat the virus.”

And many scared-straight Americans actually believed him. Not 81 million, mind you, but enough believed Joe could beat COVID, that it became his one and only “mandate.”

But here we are, almost a year later, and not only are we talking about more lockdowns, ask mandates, and forced jabs, but the death toll is higher now than it was in 2020, and the so-called “sCiEnCe” is getting goofier by the second.

During a CNN town hall in July, Joe Biden told the world if they got the vaccine, they’d never get COVID.

And just one year ago, this was Dr. Fauci:

This headline isn't from last month, it's from November 2020. Over A YEAR ago. pic.twitter.com/u2JZT6CsOD

We have been misinformed, lied to, and treated like mindless sheep led to the slaughter by Fauci and the Biden regime.

And Biden’s one job of “beating the virus” has completely collapsed and failed.

And no one has noticed more than President Trump, and he didn’t hold back even a little when he went after Biden for screwing it all up.

TRUMP: “Biden said that he was going to “beat the virus,” but instead, the virus has beaten him—and badly.” pic.twitter.com/jqZGtFhtqK

Here’s a closeup of the statement: 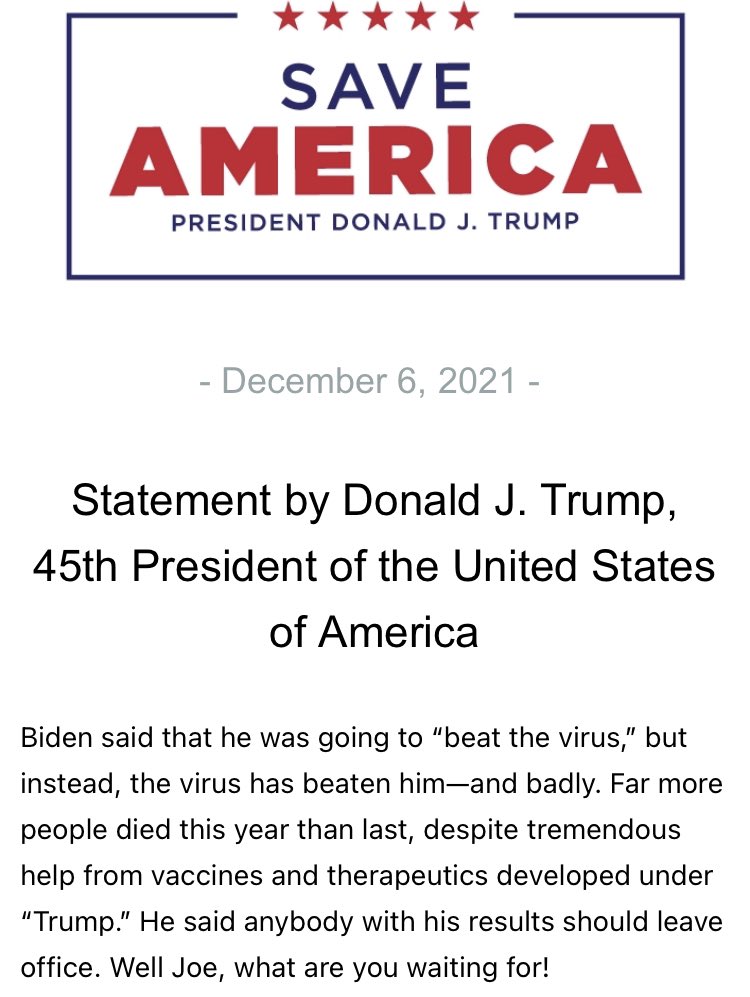 President Trump isn’t wrong. How on earth did we get to this sad point, when Biden had a vaccine to work with?

And if there is something wrong with the vaccine, and it didn’t work, why hasn’t he or anyone else said that?

They never once alluded to the fact that the vaccine could be causing the problems. Instead, Biden tripled down, added mandates – to take a vaccine that is clearly not working – and then blamed the “unvaccinated” for all his problems.

Everything Biden touches turns to you-know-what.