Steve Bannon is fired up today, and he has very good reason to be.

It’s time to celebrate because our messaging of TRUTH is actually working better than we ever thought.

Explosive new polling has revealed that the right has delivered a political death blow to the left, and as we speak, the entire Dem Party is on the verge of complete and total collapse.

All we have to do is stay the course and keep doing what we’re doing – spreading the truth.

First off, Biden’s polling continues to tank. The man has no “bottom” and absolutely no support.

Sponsored by @MattPalumbo12
and "The Man Behind the Curtain: Inside the Secret Network of George Soros"https://t.co/ne40TaF1W1 pic.twitter.com/1cZtirBKrP

Just look how “popular” the most beloved politician in the world is:

Mr. "Most Votes in History"…😂😂😂 pic.twitter.com/ycoLLDQOgK

But that’s just the tip of the iceberg, it’s what’s happening under the water that has Steve Bannon licking his chops.

On average, Americans’ political party preferences in 2021 looked similar to prior years, with slightly more U.S. adults identifying as Democrats or leaning Democratic (46%) than identified as Republicans or leaned Republican (43%).

However, the general stability for the full-year average obscures a dramatic shift over the course of 2021, from a nine-percentage-point Democratic advantage in the first quarter to a rare five-point Republican edge in the fourth quarter.

So, what does that mean?

Well, this new Gallup poll shows that support for the Republican Party has risen to its highest since 1995 – that’s a 9 percent boost since the start of 2021. 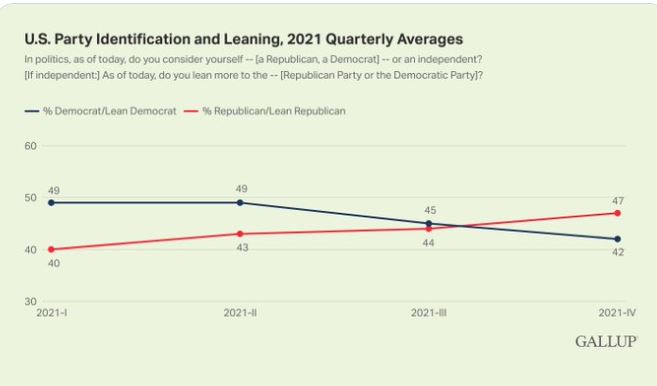 And here’s the kicker, here’s where our message is winning and absolutely killing the Democrat Party.

A separate poll conducted by Schoen Cooperman Research finds that the number of Americans who believe Joe Biden legitimately won the election has shrunk by 10 percent since last April.

Now only a narrow majority of 54 percent think Biden won fair and square.

The same poll found that only 26 percent believe democracy “is secured for future generations,” while 51 per cent think it’s in danger of extinction.

And that’s what has Steve the most fired up.

He calls this “divine providence” for a stolen election, and Americans will punish them for it.

You can watch the videos below

Steve Bannon — We have a once in a generation opportunity to destroy the Democrat Party.pic.twitter.com/oXyPX3rOO6

As Steve says, now is not the time to take our foot off the gas.

We must continue to pound away at the left’s agenda, dangerous policies, elitism, and illegitimacy.

The American people are waking up.