If YouTube was looking for an “apology” or groveling from Dan Bongino after they suspended his account they were very sadly mistaken.

YouTube suspended Dan’s account right after Joe Biden called on Big Tech to silence anyone who disagrees or questions the Regimes narrative.

The Hill reported that YouTube took action against conservative commentator Dan Bongino’s channel Friday, suspending it for violating the platform’s COVID-19 misinformation policy and demonetizing it for at least 30 days.

The weeklong posting suspension stems from a video where Bongino said that masks are “useless” in stopping the spread of the disease.

YouTube’s COVID-19 policy specifically prohibits content denying the effectiveness of wearing masks, which the vast majority of the scientific community agrees reduces the risk of infection.

The video was Bongino’s first “strike” under the policy, resulting in a one-week suspension from posting.

Well, Dan fired back at YouTube in one helluva fiery response, that ended with Dan telling them to kiss his a**.

Here’s what Dan’s “Bongino Report” Twitter account said: “YouTube just suspended Dan’s channel for daring to question the mask fascists. I guess they were waiting for an apology from us. But that’s not quite how it worked out for them. Here’s Dan’s email to “Coco” at YouTube telling them to plant a big wet kiss on his ass”

I guess they were waiting for an apology from us. But that’s not quite how it worked out for them. Here’s Dan’s email to “Coco” at YouTube telling them to plant a big wet kiss on his ass pic.twitter.com/4yFeprnr3Y

Here’s a closeup of the email Dan sent to YouTube: 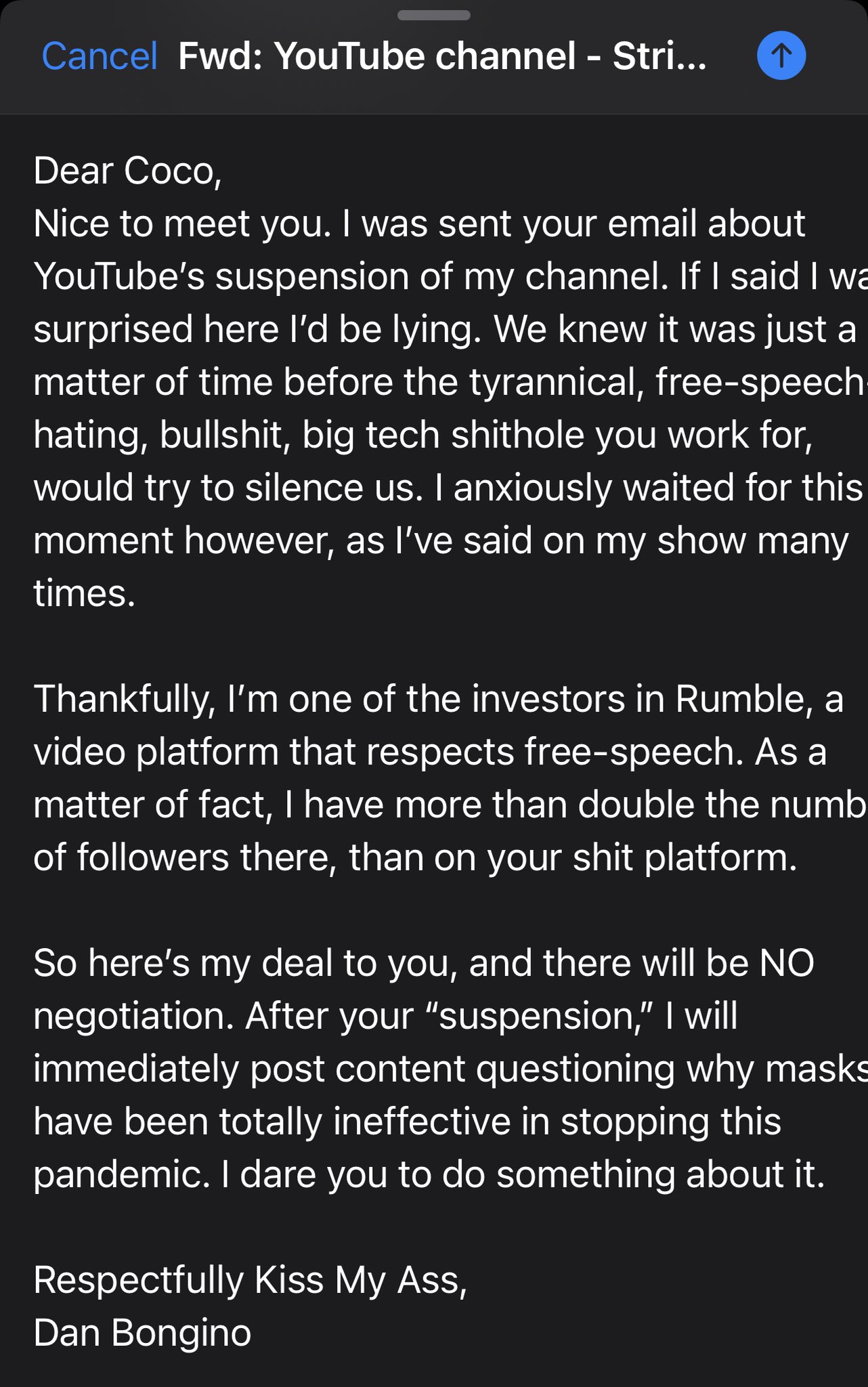 The left isn’t trying to keep anyone “safe” with all this censorship, if that was the case, they’d silence Joe Biden and CNN, two of the biggest misinformation and fake news spreaders around.

This is about power and controlling the left’s failed narrative.

And the Regime uses “health and safety” as a justifiable (fake) reason to censor. Typical communist behavior.