Did you catch Joe and Jill’s New Year message?

I don’t blame you if you didn’t. I’m guessing based on Joe’s abysmal popularity that very few people sought it out.

However, I saw it, and I was pretty surprised by it, actually.

Meanwhile, as I write this, hordes of double and triple-vaccinated people are catching and spreading COVID. It’s so bad for them, that Dr. Fauci is now telling the vaccinated to avoid restaurants and public places.

Lord Fauci says Vaccinated & Boosted people should avoid Restaurants & other public places.. saying risk of getting Covid is too high. What was the vaccine for then? Then says vaxxed people should only be around other vaxxed people. But That’s a good way for them to get Covid! 🤡 pic.twitter.com/MfybvdbQxB

So, based on his past declaration of death and illness, I expected he would deliver another dystopian nightmare message, you know, to keep things “consistent.”

But bizarrely, he didn’t.

Instead, Joe acted like everything was just great, and we were all fighting and winning the war on COVID (huh?). He was “optimistic” and celebrated all of his “greatness” as our savior and dear leader. It was rather bizarre, especially when a week before it was all doom and gloom, and death and illness. What happened to that warning? More confusing messaging from the Biden admin.

Also, it’s really out-of-touch to take a “victory lap” about a so-called “strong America,” when we’re dealing with sky-high inflation, soaring gas prices, and for many Americans, it’s bare shelves everywhere they turn.

Sadly, it looks and feels like a lot of us are living in 1980s communist Romania.

And speaking of that, some very savvy folks over at Citizen Free Press made an interesting observation about Jill and Joe and that bizarre New Year’s statement.

Kinda felt like a modern-day “let them eat cake” move… and they paid for it.

Back on Christmas Day, just over thirty years ago, Romania’s tyrannical communist dictator Nicolae Ceausescu and his wife Elena were executed by firing squad after a summary trial.

They convicted the couple of “genocide” and the murders of over “60 thousand” people.

The bloody revolution that brought down Ceausescu, ended his 21-year despotic reign and 42 years of communist rule in Romania.

But as I mentioned earlier, the Ceausescu’s were known for clinking their glasses together to celebrate their greatness, while the people suffered around them. 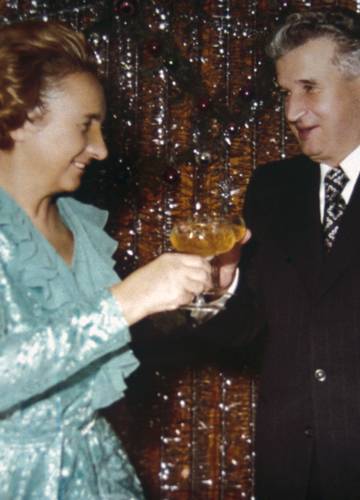 Now, obviously, nobody is suggesting that Joe and Jill are genocidal killers, but you can’t deny the comparison of two men pushing an unpopular and tyrannical agenda, while their opportunistic wives help run the show. All the while, they’re claiming “victory” while the peasants in the streets seethe with anger.

The two couples definitely have a lot in common when you look at it that way, right?

Here are comments from folks online:

“How dare these wicked infidels invoke the great name of God while they callously destroy the lives of those around them!
They speak of America being United when they are the very ones creating the divisions, hatred and class warfare between groups: non-whites vs whites, vaccinated vs non-vaccinated, males vs female, rich vs poor, etc They claim to honor respect the troops while abusing them and forcing them to take the deadly cocktail labelled as vaccines, denying them all religions exceptions and destroying the careers of many men and women who has dedicated they lives to the military. So yeah, raise your champagne glasses and toast, eat drink and be merry, you are all puppets on a string.”

“From a political standpoint Dr. Jill Biden is the acting president. She is in control. Joe even appears to wince when their prop dog comes up to him! The messaging of this video is WEAKNESS, WEAKNESS and more WEAKNESS! Joe’s voice is as though he is suffering from some illness. It is almost as though Jill visited Joe in a nursing home and asked him if he would do a video for the grandkids! Unbelievable messaging.”

“Look at where the cuts in the video are.”

“Charles Manson is more inspiring than Brandon and homewrecker Jill.”

“They’ll be clinking their glasses in hell.”

Much like Nicolae Ceausescu, Joe also seems oblivious to how the people of America actually feel about him and his policies. He and his Handlers are out there pushing this message of “great prosperity” and a robust economy, while reality tells a completely different tale.

It’s hard for elderly career politicians to spin their stories the way they used to. This isn’t the 90s anymore. We have the internet now and can respond and “fact check” them all in real-time, and that’s making it much harder for them to sell their wild “fantasy” of prosperity and strength.