UPDATE: Politico, who broke the story of Justice Sotomayor dining out with high-ranking Dems, now says they got the story wrong.

They are now claiming that the person they identified as Justice Sotomayor is actually someone else.

They want you to believe this is the person in the photo: 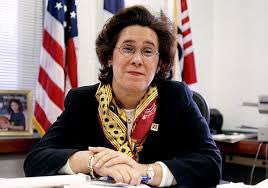 Do we believe them?

I leave that up to you to decide:

CORRECTION: This morning's Playbook had a photo of a Friday dinner at Le Diplomate, and misidentified Iris Schumer, the majority leader’s wife, as Sonia Sotomayor.

Our tipster got it wrong, but we should have double checked. We deeply regret the error. https://t.co/66NFBPld08

Just to give you an example of the crazy that happened yesterday on the high court: Justice Sotomayor claimed that 100,000 children were currently “seriously ill” and many on “ventilators,” thanks to COVID.

That couldn’t be farther from the truth if she tried…it’s a flat-out, bald-faced lie.

NEW: Justice Sonia Sotomayor said during oral arguments today that “we have over 100,000 children, which we’ve never had before, in serious condition, and many on ventilators” due to the coronavirus. That's False. https://t.co/9itoVd1s1L pic.twitter.com/zX8Nf6Bx8r

I gave Sotomayor the benefit of the doubt yesterday and wrote her off as “stupid.”

One of Trump’s former lawyers said he was chummy with people who clerked for her and they confirmed fist-hand how “stupid” she is.

But conservative radio host Jesse Kelly had another spin. He claims she’s not “stupid,” and knows exactly what she’s doing. She knows what she’s saying bout COVID is 100% wrong, but she’s saying it to push the communist agenda.

Here’s what he said exactly:

“For those flabbergasted by how absurd yesterday’s January 6th theater was, just know that Kim Jong Il claimed he shot 38 under par on is first and only round of golf. With 5 hole-in-ones. This was taught to children in schools as fact. Communists are without shame.”

For those flabbergasted by how absurd yesterday’s January 6th theater was, just know that Kim Jong Il claimed he shot 38 under par on is first and only round of golf. With 5 hole-in-ones. This was taught to children in schools as fact.

Communists are without shame.

While Sotomayor may not be the sharpest knife in the drawer (no argument there) a new damning photo of her out on the town last night, changes everything and put what happened yesterday on the bench into perspective.

Washington Examiner reporter Katherine Doyle shared a photo and tweet about what Sotomayor was doing last night, and if this doesn’t make your eyebrows go WAY UP, then you don’t understand what’s really going on around here.

(Sotomayor’s back is to camera. She’s next to Klobuchar).

Here’s a closeup of the picture and article snippet:

Also, she didn’t show up to court.

She joined in remotely, reportedly over “COVID fears.”

Because at night, Sotomayor suddenly isn’t afraid of COVID, and is out dining with top Democrat leadership at a popular DC restaurant.

“She can dine out but not show up to court?”

“None of them are actually afraid of COVID. One of these years, people will finally figure this out.”

“A little too chummy for separation of powers”

“An appearance of impropriety occurs when reasonable minds, with knowledge of all the relevant circumstances disclosed by a reasonable inquiry, would conclude that the judge’s honesty, integrity, impartiality, temperament, or fitness to serve as a judge is impaired.”

“This sure seems like a conflict of interest. In the middle of deciding a case w major implications 4 the country’s future, she is dining w 4 radical lefties? Where’s the outrage? Guaranteed if Kavanaugh was having dinner w right-wing Reps the Dems and MSM would be apoplectic.”

“ Yesterday she was telling us how dangerous Omicron is relative to Delta – later in the evening, she is dining at Le Diplomate with Democrats”

“There you have it. Political activist on the Supreme Court.”

“This is beyond disturbing. Sotomayor is too afraid of Covid to show up to work, yet she has no problem dining out? On the very day she heard oral arguments on a case that will affect over 100 million Americans. SOTOMAYOR MUST RECUSE HERSELF!”

They don’t even hide it from us anymore. That’s how fearless they are.

They don’t care that you know.

As a matter of fact, I think it amuses them.

But this cannot stand.

Clearly, Sotomayor can not be objective on this matter. She’s lying left-right-and-center and then fraternizing with the leadership of the side she’s lying for.

American’s livelihoods are on the line, here.

After the lies she spat out yesterday, how can she still rule impartial on this case?

She needs to recuse herself NOW!

Will more Republicans FINALLY stand up and demands she recuse herself?