If you thought Joe Biden was done making a mess of things, you were wrong.

He’s got a whole new mess on his hands, and the entire world is pissed-off.

Once again, Joe and his sidekick Mayor Pete have mishandled another situation, and it has turned into a worldwide mess.

Japan, India, and Emirates airlines cancelling flights to the US over 5G activation near airports. Mayor Pete AWOL

Biden says Verizon and AT&T will now indefinitely delay rollout – what did he offer them?

Will anyone ask Joe about this at his presser today??@WHCOS @PressSec

Americans want to know why the White House waited 24 hours before the catastrophe, to step in and stop it?

MORE NEWS: Something Very Interesting Happens When You Type “The Narrative is Crumbling” Into Google

Why weren’t they ON THIS earlier?

And what was the “deal” they struck to stop the rollout?

Don’t worry about the Airlines and the 5G issue tomorrow The Biden Group is on it 🤦🏻‍♀️ pic.twitter.com/a2P7tfJmWh

Now, the entire world is scrambling after they were canceling flights to avoid any issues with the 5G towers. 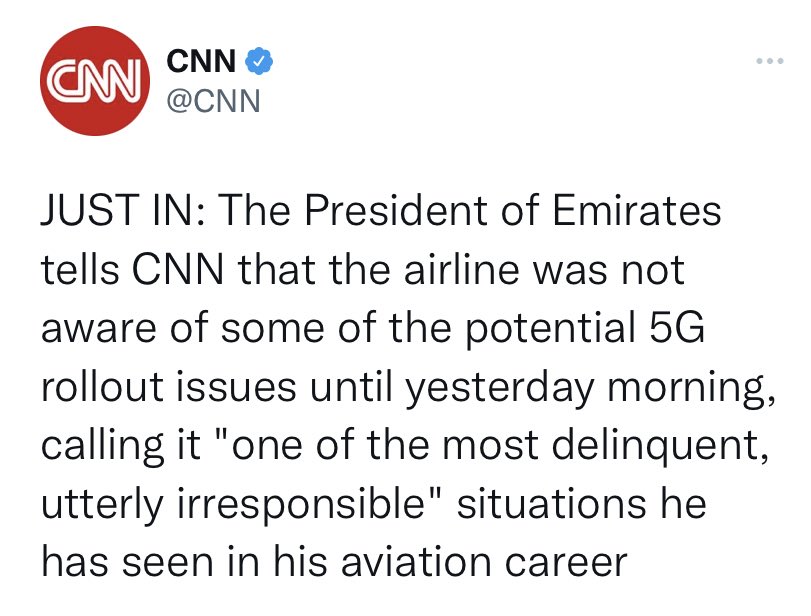 The Independent reported that major international airlines have begun cancelling flights to the United States after the Federal Aviation Administration raised concerns about 5G wireless towers near airports.

Emirates, Air India, Japan Airlines and All Nippon Airways announced it would suspend flights after the Airlines for America trade group pressured the Biden administration over “catastrophic disruption” due to the scheduled 19 January rollout.

Wireless telecom giants AT&T and Verizon announced the activation of 5G towers near some US airports would be delayed for two weeks to resolve the differences.

The high-speed 5G internet uses so-called C-band frequencies close to those used by aircraft to measure their altitude, with the Federal Aviation Administration (FAA) warning potential interference could affect sensitive aeroplane instruments such as altimeters and significantly hamper low-visibility operations.

And United Airlines has had it, and is now telling Americans to complain to the US government.

Here’s what United Airlines said about the 5G rollout in a fiery statement:

“Your flight is delayed due to potential interference caused by the implementation of a new 5G signal by telecommunications systems near Denver International Airport and its possible impact on aircraft equipment.

“If you have any concerns, please address them with the Federal Communications Commission here.”