Alyssa Milano is the “Chelsea Clinton” of tweets.

What do I mean by that?

Well, Chelsea Clinton is known for being a mess on social media, always trying to “slam” someone, but it backfires in her face. She’s always getting her facts wrong, and she says some of the dumbest stuff imaginable.

Remember this doozy, when she “hoped” that a photo of Abe Lincoln in a MAGA hat was “photoshopped”? Good Lord… 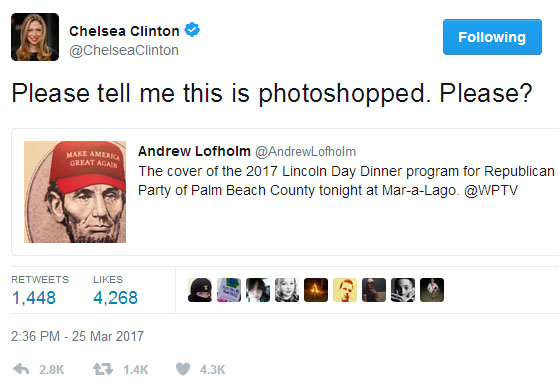 Chelsea Clinton is the type who should just stay off the internet and allow other people to battle… Alyssa Milano is the same way.

MORE NEWS: Photo of  “Kyiv Burning” Goes Viral, But It’s Actually a Picture of a U.S. City During a BLM “Peaceful Protest”

She’s just a dinkus, for lack of a better word.

She tries so hard to appear relevant, smart, and clever, and she flops and fails every single time.

And that’s what she did again with her very confusing two-word tweet. I am not entirely sure if she’s slamming Joe or supporting him.

But one thing we can all agree on is that it’s a very dumb tweet, and if she’s trying to rally the troops for flailing old Joe, she just failed miserably.

If she’s going after Joe for allowing a “war,” she blew it.

What exactly does that mean? It’s anyone’s guess, but here’s what people had to say to Alyssa:

“Good point. What happened post Biden’s election? Inflation exploded, oil and energy prices went haywire, the border exploded with new aliens arriving and no checks and balances, and now we have a war in Eu and Taiwan’s days are numbered. You’re a joke.”

“I don’t think this tweet is turning out how you thought it would, lady lol”

“As we’ve seen with the complete and utter failure of your boy Joe.”

“Yes they do Alyssa, and after looking at this mess, I am very proud that I voted for Bernie Sanders”

“You’re not making the point you think you’re making.”

“She regrets her vote, everyone lol”

“Are you now regretting your vote? This tweet is confusing.”

“Yes they do and you have blood, lots of it on your hands”

“So true. When we elect feckless, incompetent and ineffective leaders the world goes to war.”

“I can’t tell is Alyssa Milano pissed at those 81 million people or happy about it?”

Because this tweet was so confusing, I just went through Alyssa’s timeline, and she’s much less “political” than she used to be when she had raging Stage 5 TDS.

It’s hard to tell if she’s still “Team Biden.” I saw she retweeted him yesterday, but the “excitement” isn’t there and she seems more concerned about the “humanitarian” aspect of the war than being political.

Although she’s still a “Tucker-hater,” but that’s not surprising, is it?

So, that now leads me to believe this was a tweet slamming Joe Biden and regretting her vote.

Does that mean she’d rather have President Trump? No. But She probably wishes some other Dem had gotten the nod… which would have also been a disaster.

It’s also interesting to note, that the woman who once garnered tens of thousands of retweets, hardly gets any nowadays.

Nobody is “enthusiastic” about Joe Biden.

Not even the 81-million who “voted” for him…