When she was an American citizen, she went by the name Beverly Yi. She’s a 19-year-old us-born figure skater.

But she gave up her US citizenship and defected to China and changed her name to Zhu Yi.

Her dream was to skate for China in the 2022 Winter Olympics – but that dream has turned into an all-out nightmare.

On her first night of skating, Yi fell on the ice and ignited tremendous anger from the Chinese people, who called her a “fake patriot,” and said someone who was born in China should have had her spot.

Yi said she was “embarrassed” about her poor performance, but she had another skate to look forward to. I am sure the former “Cali girl” thought she’d win back the hearts of the Chinese people by nailing her second skate.

“I’m upset and a little embarrassed,” she said, according to Reuters. “I guess I felt a lot of pressure because I know everybody in China was pretty surprised with the selection for ladies’ singles and I just really wanted to show them what I was able to do but unfortunately I didn’t.”

But that’s not what happened.

She fell yet again…

So, you can imagine how angry the Chinese are today after the second spill, right?

I’m sure they’re ready to send her to the gulag.

Second skate & poor performance on both –

US-born Chinese figure skater Zhu Yi falls AGAIN – breaks down in tears… day after being branded a 'disgrace' by her countrymen for finishing last after giving up American citizenship to compete for Beijing – pic.twitter.com/c83nWiTcqP

This time after she fell, the former American broke down in tears.

This is the cover meme from Daily Mail. 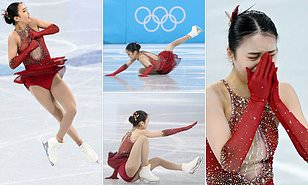 The Chinese public continues to mock foreign-born figure skater Zhu Yi for crying after she flopped in the women's figure skating event. https://t.co/jRIRWAp615

Here’s what Daily Mail said about the second fall:

The American-born Chinese figure skater who gave up her US citizenship and changed her name to compete for the Communist country at the Winter Olympic in Beijing fell twice during the women’s short program team event – to the scorn of many her adopted country.

Beverly Zu, 19, who changed her name to Zhu Yi, finished with the lowest score of the event at Beijing’s Capital Indoor Stadium after she failed to land a jump and fell on the opening combination, and botched another jump later in her short program.

Skating to Paint It Black by The Rolling Stones, Zhu scored 47.03 after she tumbled on her first combination triple flip-triple toe-loop jump, crashed into the wall, and bungled her triple loop later in the set.

Her performance knocked China from third to fifth place in the team event.

Zhu decided in 2018 to compete for China in the Olympics. She changed her name and gave up her American citizenship, however, she is still facing criticism for not being fluent in Chinese.

Her poor debutant performance also now has some questioning why the California-born skater was picked to represent China instead of a figure skater who was born in the country.

Zhu was born in Los Angeles to Chinese parents and given the name Beverly, and grew up with a privileged background.

Her father, Zhu Songchun, is an award-winning scientist who joined the staff at Beijing’s Peking University in 2020. He previously worked at the University of California, Los Angeles.

The Olympian started figure skating when she was seven years old.

In 2018, she won the novice division while competing at the United States Figure Skating Championships in San Jose, California.

Later that year, she made the decision to represent China in the Olympics, a move that followed the nation’s efforts to attract top athletes to their team.

She surrendered her American citizenship so she could compete for China and subsequently changed her name to Zhu Yi.

China has recruited at least a dozen foreign-born athletes, including Zhu, in recent years to compete on its Olympic teams, a move which was part of the country’s bid to bring home more medals

This is definitely a big ol’ dose of karma.