Dwayne “The Rock” Johnson is facing some serious backlash for a tweet he wrote back in 2011, smearing a nursing student who he called a “tranny” and a prostitute.

The Tweet began making the rounds online after “The Rock” got involved in a dustup over Joe Rogan’s past “n-word” usage and ultimately disavowed him.

The Rock had recently come out and showed support for Joe Rogan after the left began their campaign to cancel him over so-called “COVID misinformation.”

Then, someone dug up clips of Rogan using the n-word, and Dwayne was called out for his support of Rogan by Don Winslow and he backed down.

MORE NEWS: Discovery CEO Slips Up and Accidentally Spills The Beans About CNN

Don said this: “Dear @TheRock, You’re a hero to many people and using your platform to defend Joe Rogan, a guy that used and laughed about using the N word dozens of times, is a terrible use of your power. Have you actually listened to this man’s many racist statements about Black people?”

And The Rock responded with this: “Dear @donwinslow Thank you so much for this I hear you as well as everyone here 100% I was not aware of his N word use prior to my comments, but now I’ve become educated to his complete narrative. Learning moment for me. Mahalo, brother and have a great & productive weekend. DJ”

Dear @donwinslow
Thank you so much for this
I hear you as well as everyone here 100%
I was not aware of his N word use prior to my comments, but now I've become educated to his complete narrative.
Learning moment for me.

Mahalo, brother and have a great & productive weekend.
DJ https://t.co/3mBf85wRoe

It wasn’t long after that exchange that The Rock’s old “tranny” tweet showed up online.

Back in 2011, a nursing student by the name of Katie V. was trash-talking The Rock online and called him a “douche.”

Mr. Johnson responded by calling her a “tranny” who was prostituting herself to get through nursing school. 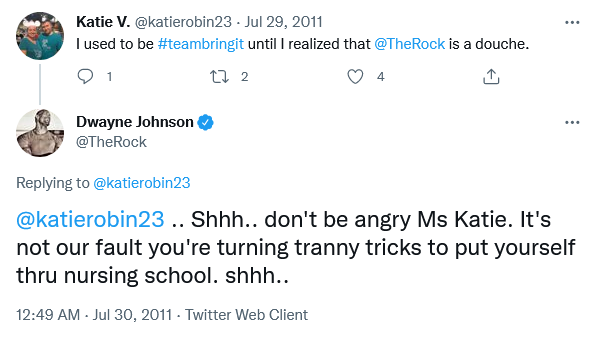 The backlash for the “tranny tweet” was swift and harsh.

Dwayne @TheRock Johnson called a young woman working her way through nursing school a tranny and a prostitute.

Dwayne The Rock Johnson is sexist, misogynistic, and transphobic.

This is why no one should feel any sympathy for what's happening to @TheRock right now. Here he is calling @joerogan a buddy for years, but all it took for him to immediately throw his supposed friend under the bus was a few twitter lefties criticizing him.

Eventually, The Rock deleted the tweet, which actually only made matters worse.

Hey @TheRock … why did you just delete this?

In addition, a video clip of The Rock mocking the Chinese language during a scripted WWE skit made the rounds

And this SNL skit where he treated “pedophilia” as a joke:

As of this publishing, Joe Rogan has issued two apologies for his past n-word clips, and Spotify continues deleting podcasts, but the left is still pushing to cancel him.

Rogan’s n-word usage is garbage on its own, but this “canceling” is obviously political.

We’ve yet to get a statement from The Rock on his “tranny” tweet or the video clips.

In a sane world, everyone’s ugly past would stay there, and we’d all have the common sense and decency to realize that most people have “evolved” or learned from their mistakes and should be judged by who they are now, not who they were years ago.

But this era of non-stop “leftist cancel culture” is like a merry-go-round of hell that never ends.