If you’ve ever wondered why Bill Gates owns more farmland than any other private citizen in the United States, we may know the answer…

If livestock owners don’t have places to grow food for their animals to eat, they can’t keep the animals… and when the animals go bye-bye, in walks the “fake meat industry.”

Bill Gates states that rich countries should give up all beef in favor of synthetic fake meat, a transition that can be supported by changing people's behaviors or enacting regulations to shift demand.

And that seems to be his plan, because now, Bill is calling on all “First World” nations to only eat “synthetic beef,” and says don’t worry, you’ll get used to the “taste difference.”

MORE NEWS: Democrat Party in Panic Mode As The Bottom Completely Falls Out Of Pennsylvania

Western Journal reported because real meat is real trouble for the environment, tech guru Bill Gates wants the world’s richest nations to have helpings of synthetic beef instead while leaving real meat for poor nations to eat.

Gates expounded upon how people should eat in an interview with MIT Technology Review.

“I do think all rich countries should move to 100 percent synthetic beef. You can get used to the taste difference, and the claim is they’re going to make it taste even better over time,” he said.

“Eventually, that green premium is modest enough that you can sort of change the [behavior of] people or use regulation to totally shift the demand,” he said. Gates criticized what he called politics for getting in the way.

“There are all these bills that say it’s got to be called, basically, lab garbage to be sold. They don’t want us to use the beef label,” he said.

While richer nations eat fake beef, genetically altered animals will provide meat for other places, such as Africa, he said.

So, what is “synthetic meat”? Well, it’s gross, I can tell you that much.

But here’s a video that goes into even more detail.

And in case you’re wondering why Bill Gates is doing all of this… I think I found the answer.

No, it’s not for the “environment” like he claims it is.

Lots and lots of money.

This clip is only 34 seconds long, and if you listen closely to the end, you’ll hear exactly why Bill is pushing “artificial meats.”

He’s invested in it up to his eyeballs.

So, with all this “synthetic” fake meat, I bet Bill is looking lean and trim, right? Healthy as an ox…

Well, no, actually not…

A recent photo of Bill has people wondering what the heck is in all that fake meat Bill’s been eating??

Does this man look like the picture of good health to you?

This man is giving you health advice on what you should and should not eat!?

Telling you its healthier to eat his fake meat and to avoid real meat because its bad for you!! and oh he's also rigging the economy so it can only buy fake meat from him which he's heavily invested in! pic.twitter.com/5BRUVBu7uS 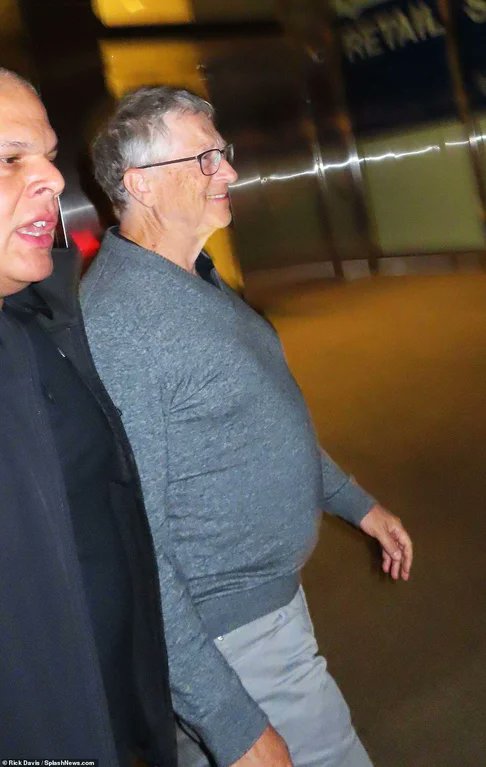 “He has no expertise in health and is an expert eugenicist.”

“Why is this unhealthy, walking man-boob telling anyone how to eat and live?”

“Who would take health advice from a guy who sat at his computer all day? “

“This is what happens when people get money. They think they’re a f**king expert on everything. Shut up, nerd”

“And they say Elon is the super-villain???”

“Well, according to the left, Bill could be pregnant, so….”

“May Bill Gates reap what he sows.”

“Is his plan to eat ALL of the real meat so there isn’t any left, because that’s what it looks like.”

“Regardless of his looks, what credentials would he have anyways to shell out this advice??”

“I don’t take any advice from people that want less humans.”

Maybe Bill should head back to Epstein’s “Pedo Island,” where he can sit by himself and eat all the synthetic meat he wants and leave the rest of us alone?