There’s a new “tell-all” book out about Melania. Her traitorous former spokeswoman Stephanie Grisham wrote it.

I won’t link to the book, or even list its name here.

Now, overall, I don’t believe in this type of bitter rubbish, but there are always some grains of truth in these types of books, and I think I just found one, and I actually loved the observation, so I wanted to share it with you.

It has to do with Melania’s observation of Jill and Joe Biden on the campaign trail back in 2020.

As you know, Joe’s Handlers didn’t drag him out of the basement very often, but when he was, Jill was often very close by… Jill was always next to his side, even IN the basement.

And according to this new book, Melania had a theory as to why that was, and this theory sounds pretty darn SPOT ON if you ask me.

OK Magazine reported that Jill, 70, is often seen holding her husband’s hand, kissing him on the cheek and standing right by his side. After a comparison was made, Melania reportedly mocked the Bidens’ close relationship as a necessity.

“I don’t stand next to him [Trump] because I don’t need to hold him up like she does,” Melania quipped to ex-aide Stephanie Grisham, the former Press Secretary wrote in her upcoming tell-all, I’ll Take Your Questions Now: What I Saw in The White House.

There’s a lot of truth to this… and we still see it to this day.

MORE NEWS: [VIDEO] Many Shocked At How Black Congregation Reacts to Lt. Governor of NC’s Bold Words About Trans Movement

Back in February, many Americans were shocked when Jill looked like a nursemaid, trying to help Joe walk.

Meanwhile in America..
Jill Biden holds Joe Biden's hand and walks him off stage… as the crowd claps..🤔 pic.twitter.com/gdqnVTxjrn

Then, there was the time that Joe just randomly wandered away when Jill was speaking: 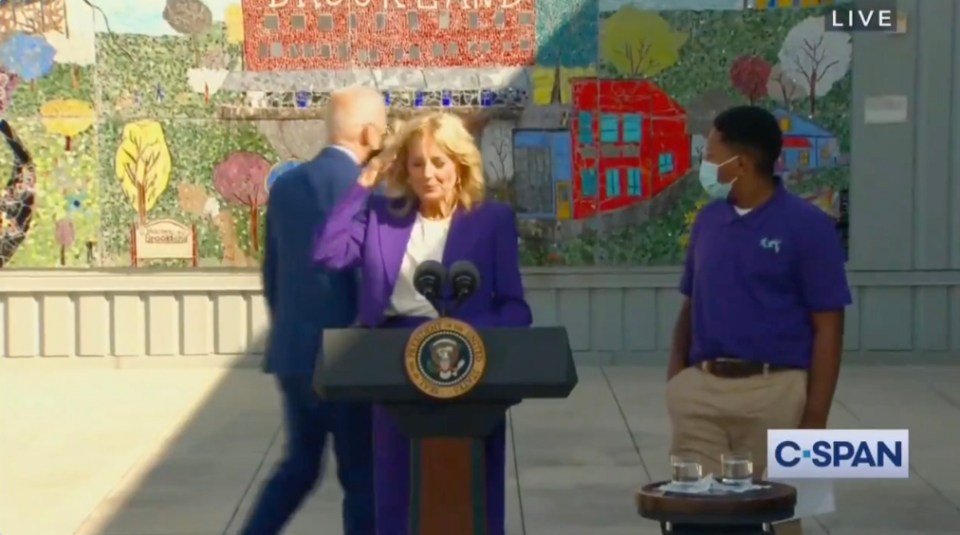 He also “wandered” here as well:

Or when she recently dragged him away from the press, when he was fumbling questions on Catholicism.

He was also wandering around, “lost” in a cafe in England. Jill had to rescue him from that as well.

So, I don’t know if Stephanie Grisham is telling the truth here – but of all the things she claims about Melania, I’d bet good money that this observation is true.

After all, we’ve all seen it with our own eyes.

I don’t know what Joe Biden would do without his trusty nurse Jill by his side.