I love that so many of these good-for-nothing establishment globalists are taking themselves out of the race. We don’t even have to lift a finger.

My guess is they’ve taken a long, hard look at their internal polling and realize there’s absolutely no way in hell they can win their primary race.

The latest RINO to fall on the sword is none other than Michigan traitor Fred Upton, who voted to impeach President Trump.

The Washington Times reported that Rep. Fred Upton of Michigan, one of 10 Republican lawmakers who voted to impeach former President Donald Trump, is calling it quits after more than three decades in Congress.

Mr. Upton on Tuesday announced on the House floor that he is not seeking re-election in the 6th Congressional District at the end of his term. The 68-year-old has served in the House since 1987.

“Even the best stories have a last chapter: This is it for me,” Mr. Upton said, battling back tears.

Good, I hope he went home and cried in his stupid RINO pillow all night long.

This guy has been in Congress for 19 long and miserable years, thank God he’s a goner.

And as you can imagine, Don Jr. was thrilled and also believes this guy’s polling had to be atrocious.

Here’s what Don Jr. said: “Well Bye: One of the 10 House GOP yes votes for impeachment! I’m sure his poll #s were stellar.”

Well Bye: One of the 10 House GOP yes votes for impeachment! I’m sure his poll #s were stellar. https://t.co/0TpcpeDimA

President Trump just chimed in too. I love this statement!! 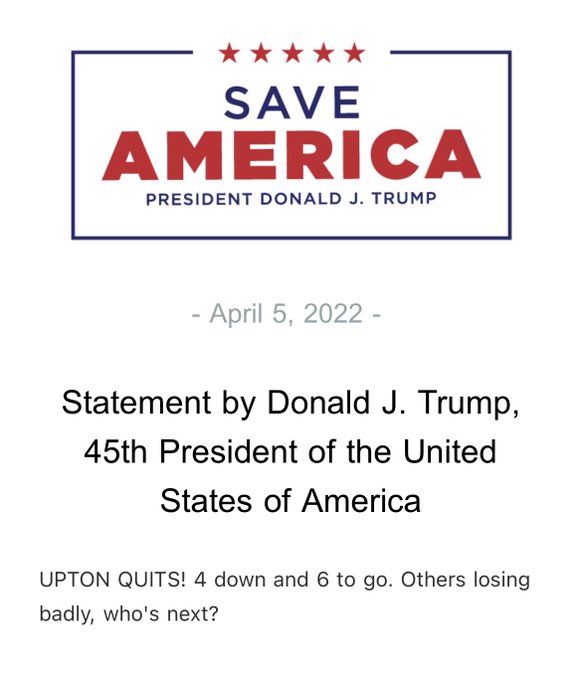 I can tell you that before I moved last year, this idiot was my rep, and I had a lot of angry calls and emails with his office while I was in his district.

I am thrilled that he’s been pushed out and forced to retire.

Next, we need to ensure that RINO Peter Meijer is primaried as well.