The number of people who watched President Trump’s recent Michigan rally is shocking — not really “shocking” to me and you, but it will be to Dems, RINOS, and the liars and frauds in the media.

Let’s put it this way…it’s a staggering amount of people to tune into a rally online.

President Trump’s rally was in Washington Township, Michigan, which is a suburb of Detroit.

It’s a far ways away from me, I live in the Western part of the state, but I have family living in Washington Township, and yes, they were at the rally, and they said it was absolutely electric.

There were many people at the rally, but it’s the jaw-dropping number of people who watched it online that has to be scaring the bejeezus out of Democrats, media, and RINOS.

Look at these numbers, folks:

And this is the guy who supposedly “lost”?

Give us all a break. 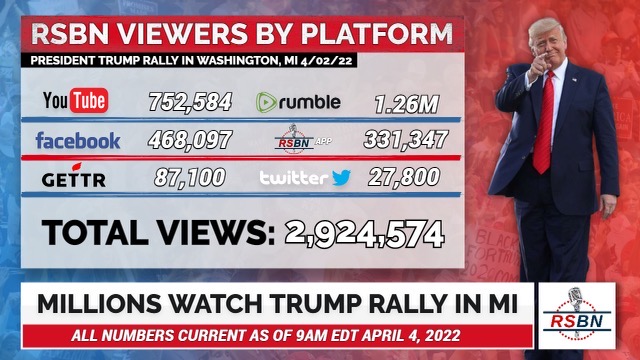 President Trump’s next rally is in North Carolina.

I have a feeling the Dems are watching this “Trump enthusiasm” spreading all over the country like wildfire and are ready to jump off a cliff.

They tried so damn hard to stop him, and it didn’t work.

The truth is, they actually made him even more popular.

This is what happens to cheaters — in the end, their entire house of fake cards crumbles.