You know Tucker Carlson had to be doing a little jig when he found out CNN+, one of the biggest business ventures CNN has ever unleashed, has gone belly-up after only 3 weeks’ time.

He definitely was thrilled, as a matter of fact, he spent a chunk of his show mocking everything and everyone connected to CNN+, including his former co-worker Chris Wallace.

I love this chyron Tucker had on his show. It read: “Unlike Pevy Jeffrey Toobin, CNN+ Didn’t Have A Happy Ending.”

That comment of course, is for CNN’s legal analyst Jeffrey Toobin, who was fired from The New Yorker after he masturbated on a Zoom call when he thought nobody could see him.

After reports came out stating employees were shocked and devastated by the fall of CNN+, Carlson commented that “House eunuch,” Brian Stelter had spent the day gloating about the fall of Netflix, only to be later prescribed a dose of his own medicine.

MORE NEWS: What Was She Thinking? Jill Biden’s Lastest Outfit Gets Compared To Willy Wonka

Here’s what Stelter said about Netflix:

I think what happened for Netflix for a while, they were high on their own supply. They believed they were the future of everything, everything was going to be streaming all the time. And maybe that’s not quite true.

Tucker had some fun with that and said this about CNN+:

They were high on their own supply. They convinced them of something that was implausible. They told themselves lies.

Tucker Carlson mocks Brian Stelter for gloating over Netflix's falling stock, just as the CNN+ streaming service got shut down after less than a month.

And of course, this hilarious graphic depicting Chris Wallace as a “ghost” and a RIP message to CNN+ 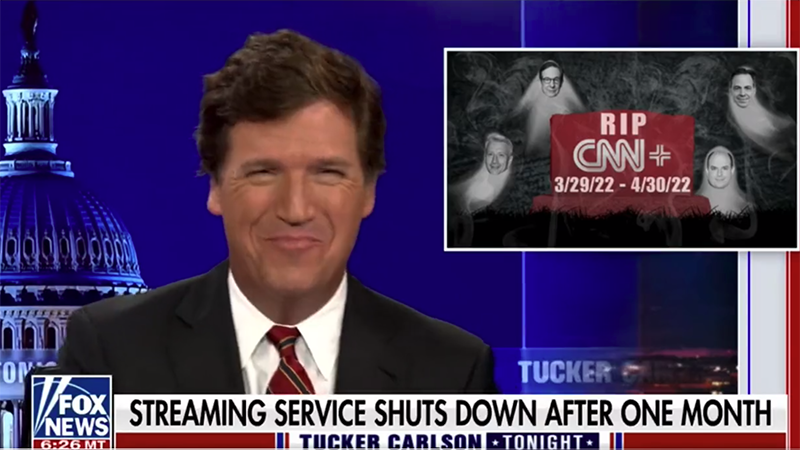 You know Chris Wallace has to feel like a gigantic dinkus right now.

Wallace left behind his highly respected job at Fox News, where I am sure they paid him a handsome salary, all because he didn’t like Tucker reporting an alternate point of view and opinion on January 6th.

Tucker strayed from the “Regime messaging” and Chris Wallace didn’t like that. He also has Stage 5 TDS, so he quit and went to CNN, the laughingstock of “news,” with no ratings, and a reputation for spreading piles and piles of fake news.

What was he thinking?

All in all, the fall of CNN+ was expected by almost everyone.

Why on earth would people who weren’t watching CNN for “free,” PAY for it?

The entire business plan made zero sense and narcissists like Chris Wallace got exactly what they deserved.