If you’re wondering how much Joe Biden really “cares” about kids, look no further than how he’s treating his granddaughter, Navy Roberts.

Navy is the now 3-year-old little girl who Hunter had with a DC stripper.

Hunter, Jill, and Joe have never even met the child — nice, right? And to make matters really horrific, the little girl and her mom are in danger, thanks to a disgruntled ex-fiance, and Joe Biden is refusing to give the child security.

Can you get more heartless than that? It’s not the little girl’s fault her father is a deadbeat dad who cheats left and right and impregnates women on a whim.

Personally, I’d rather pay to help protect this little American girl than send 40 billion to Ukraine.

Daily Mail reported that a callous Joe Biden is refusing to provide protection for his son Hunter’s lovechild despite the little girl and her mom becoming entangled in a terrifying harassment case.

Lunden Roberts, 31, claims her cage fighter ex-fiancé Princeton Foster bombarded her with threats and made frightening comments about three-year-old Navy Joan, the daughter she shares with the First Son.

The single mom called cops last month alleging that Foster, 27, punched a dent in her car and slashed the wires to her security cameras after turning up at her Arkansas home in the middle of the night.

She also filed for a protection order, claiming the amateur fighter told her he was ‘going to heaven’ with Navy Joan, referring to the angelic, blond-haired youngster as his daughter despite having no biological link to her.

DailyMail.com understands that President Biden has been ‘made aware’ of Roberts’ ordeal and the alleged threat to his granddaughter – who bears a striking resemblance to a young Hunter.

But so far the world’s most powerful man has declined to intervene or even reach out to see if the little girl is OK, according to a close friend of Roberts, who put on a brave face Thursday as she and Navy Joan were spotted playing tee ball in their local park.

The President frequently talks about his love and pride for his grandchildren. But if he really cared for every member of his family he would have done something by now,’ the pal told DailyMail.com.

‘The Secret Service would act at the drop of a dime if someone threatened any of the other Biden kids – but it’s like Navy Joan doesn’t matter.’

Roberts instead asked authorities in rural Independence County to step in to keep them both safe from Foster, whom she started dating in 2018, about six months after her fling with Hunter ended.

‘I need this order because I am scared of what Princeton might do to me and my daughter … I am also aware he carries a firearm daily,’ Roberts stated in her application for a protection order.

Foster ‘claimed he was one of God’s prophets and him and my daughter are going to heaven,’ she added in a harrowing 10-page affidavit obtained exclusively by DailyMail.com.

The couple got engaged in April 2019 and moved in together but Roberts called it quits in August 2020, allegedly because of Foster’s drinking and substance abuse.

The mom claimed she was subjected to months of harassing calls and texts which culminated in Foster storming up to her in a restaurant on May 13 and shouting ‘Where is my daughter? … I will f**k you up!’ over and over,’ according to her statement.

‘He was also continually calling and we were recording the audios of him screaming (like the Joker) saying he was on his way with his MMA friend to fight whatever guy I was with, using racial slurs and in one recorded audio you can hear him scream ‘I’m on my way – I’m going to scalp your f**king head,’ Roberts wrote.

Roberts said she and her female friend were at home later that night when someone banged on the door ‘so loud it shook the walls, doors and furniture.’

‘I yelled to ‘get down’ where we hid behind furniture in fear he would open fire since I’m aware he carries a weapon … I’ve never been this scared in my life. I grabbed my gun prepared to defend us if he were in the house,’ she wrote. ‘We could also hear him screaming, shouting profanity while jiggling door handles. We knew he was outside but it just stopped. The police showed up within seconds. He got away. We told them everything.

‘One cop found the tire tracks where Princeton had driven up in my front yard and shined his lights through my house trying to see us since I had turned all the lights off.’ Roberts claimed the next morning she found a dent ‘punched’ into her car and part of a door handle ripped off.

The wiring for her outdoor security cameras had been cut and a tire on her friend’s vehicle had been slit with a knife, she alleged.

Here’s a copy of the protection order she filed: 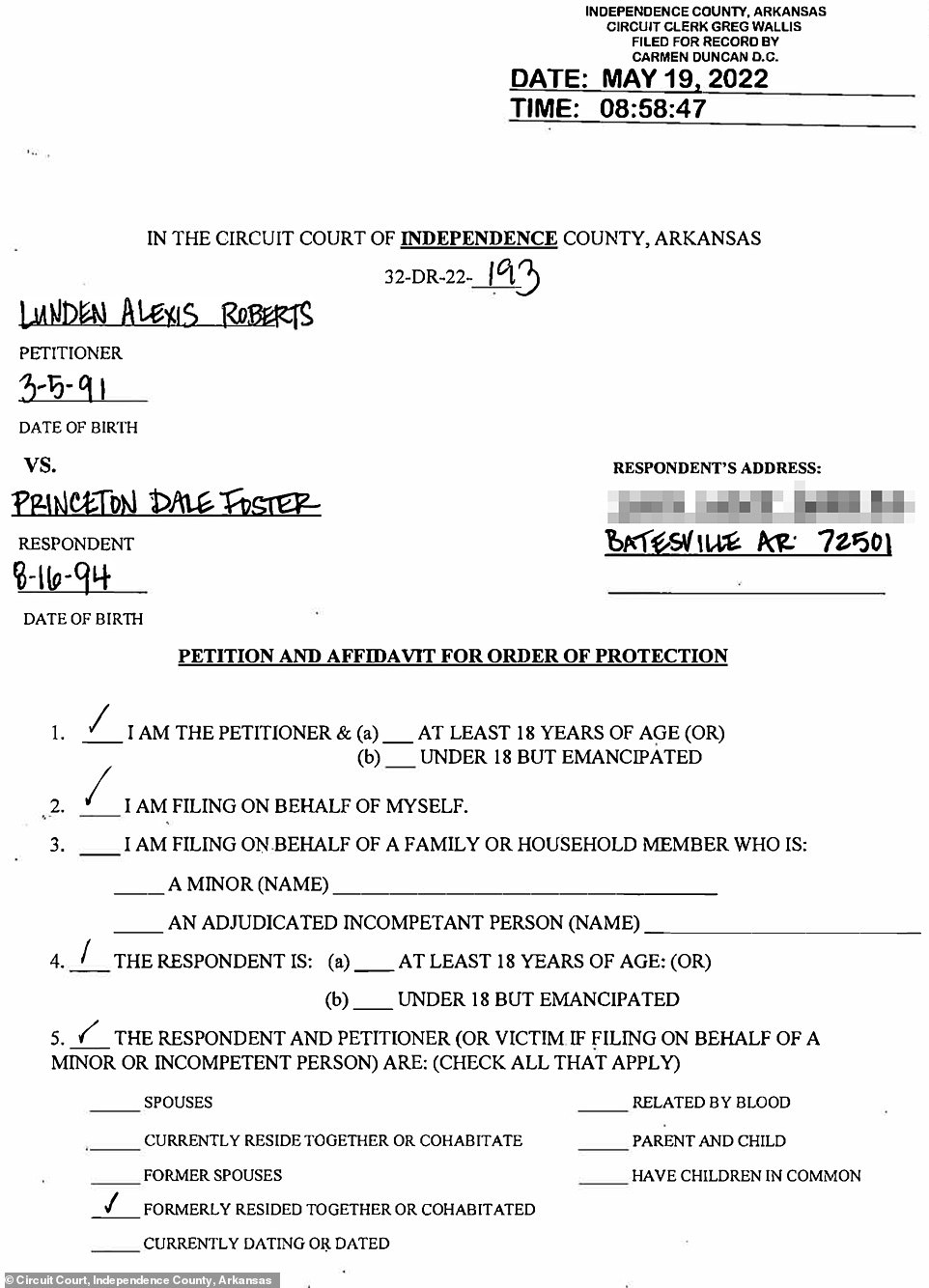 Hunter had an affair with Lunden Roberts while he was cheating on his wife with his dead brother’s widow.

I can’t believe Joe, Jill, and Hunter would be so heartless and shun this poor child, especially being how she and her mother are clearly in danger from a crazed, violent man.

This really shows you the type of ghouls the Bidens’ are… absolute sociopaths.