This Cassidy lady is the gift of lies that keeps on giving.

Every day when I wake up and check the internet I can’t wait to see what Cassidy Hutchinson lied about this time… and trust me, today’s lie is a doozy, perhaps the biggest one yet, at least the one with the biggest potential ramifications.

So, let me set this up for you… it’s a tad convoluted, but I think I can present this in a neat and tidy way that makes quick sense.

I was perusing the internet, as I do all day, every day, and I happened upon a tweet from a man by the name of Mike Davis.

So, the guy’s got some chops, clearly.

Mike caught my attention because he wrote a Twitter thread that claims he has evidence (email) involving WAPO, which shows they know without a doubt that Cassidy Hutchinson lied AGAIN.

You remember Jeff, right? He got the “Roger Stone” treatment by the feds, just for looking into the 2020 election. Feds showed up and raided him on or around June 15th.

MORE NEWS: For 6 Years Michelle’s Been “Groomed” to Run For The 2024 WH, And She’s Using Barack’s “Formula”

Well, come to find out, it was Cassidy who told the January 6th committee that Mr. Clark was at the White House “frequently,” strategizing with Giuliani and the Trump campaign to object to the election.

However, as with everything this woman says, that was also false.

Here’s her testimony from March 7th. 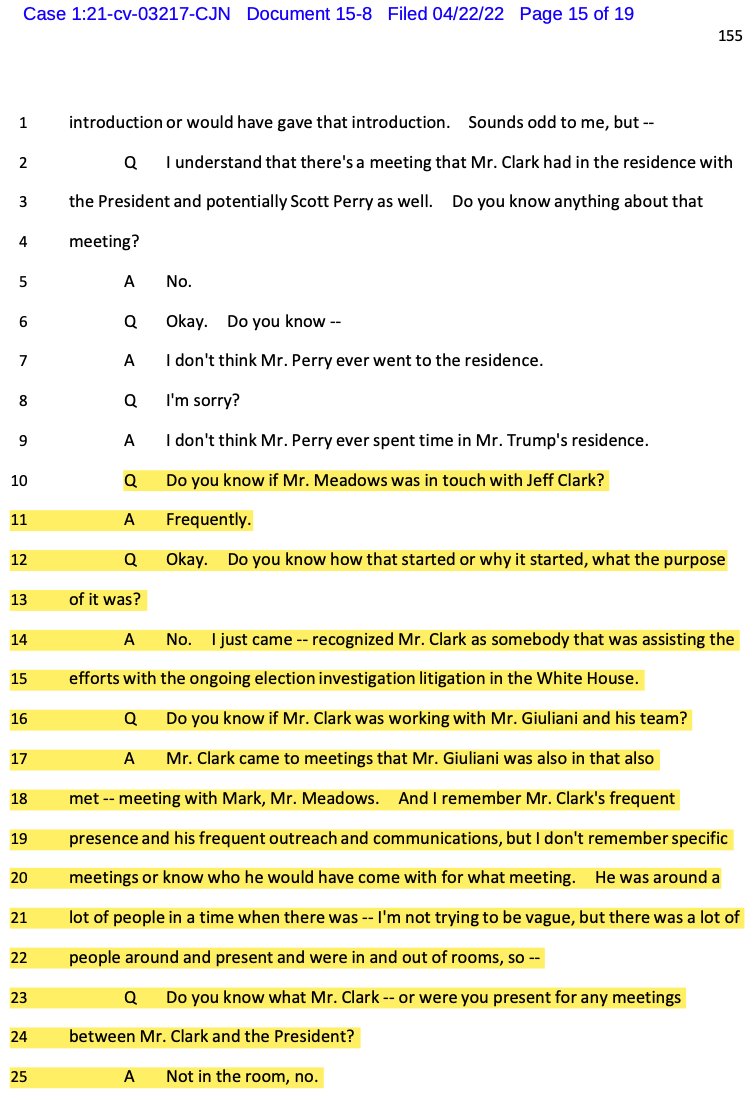 Per Mike Davis says this is 100 percent false.

He says that Giuliani and Team Trump never met or communicated with Mr. Clark.

And now, the source he has inside WAPO appears to confirm that.

“I have spoken with a well-placed source, and I have a confirmatory email between @washingtonpost and another well-placed source. So The Washington Post knows Ms. Hutchinson’s testimony is not truthful. When will WaPo report this?”

His source appears spot-on because here’s the email exchange between the two:

So, here’s what that email means:

A WAPO reporter by the name of Michael Kranish emails someone to ask about Cassidy’s testimony regarding Jeff Clark, the man the feds raided.

Kranish wanted to verify that Mr. Jeff Clark was indeed at the White House “frequently,” as Cassidy claimed he was, or was this a case of “mistaken identity”?

The guy, whose name is Robert Costello, responds and says it was indeed “mistaken identity.”

He says the man who was at the White House “frequently” was actually named Justin Clark.

JUSTIN, not JEFF, for crying out loud…

This Cassidy girl literally is a coffee-fetcher, who really THOUGHT she knew a lot more than she did.

Is what she said under oath to the J6 commies, the reason the FBI went and raided Mr. Clark?

And if so, this is now starting to look and smell exactly like the Russia hoax and all those phony FISA warrants, right?

I will tell you what, when the GOP takes back control, if they don’t investigate the investigators and everyone involved in this J6 three-ring commie circus, they need to be voted out of office.

Because mark my words, Dems and RINOS are going to take J6 and turn it into Russia Hoax Part 2 and use all the same tricks that they did before.

They got away with it the first time, right?