We all miss Rush so much, don’t we?

Imagine all the insight and wisdom he’d have to share with us right now as we go through this disastrous and fraudulent Biden admin?

I know we’re all missing his wisdom and guidance, but one thing we should be very thankful for is his former producer Bo Snerdley, who is still out there fighting the good fight.

And the other day I happened upon this amazingly brutal and funny Hillary meme he shared, and I had to show it to you because it’s just so spot-on.

Bo “went there,” and called out Hillary and her “killer ways”… ha. Yikes.

It’s an image of Hillary telling everyone that nobody needs an AK-47… and then under that is an image of a shocked-looking comedian Kevin Hart, with the words, ” Nobody had 56 friends commit suicide.”

Here’s a closeup of the meme. 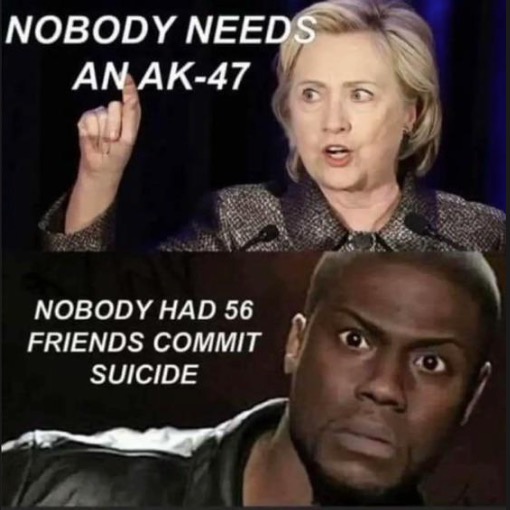 Why do so many people who are close to the Clintons, end up dead? It’s really quite disturbing.

“Has that number been updated recently? I think it’s a lot higher”

“If you’re a friend of Hillary’s, you should start every day by announcing on social media that you’re not feeling suicidal”

“Another Arkansas friend just “committed suicide” a couple of months ago… why does this keep happening?”

“Bo, I think Rush would have LOVED this meme!!”

“Man, seeing Bo really makes me miss Rush, but this meme was so good, I laughed out loud”

” feel like that number is a lot higher than 56″

“Bo, make sure you never befriend Hillary, we want to keep you around!”

Hey Bo, if you’re gonna mess with Hillary, you should sleep with one eye open, just to be on the safe side!