There’s a new story out in the liberal rag, “The New Yorker,” and they inadvertently outed the “kingpin” of the January 6th plot. The guy who was coordinating things, working on his end, and speaking directly to Biden’s top puppet master and shameless liar Susan Rice… It was Mark Milley – the “woke” general who is destroying the United States Military with his progressive policies. A man with so much communist blood running through his veins, that he believes his political beliefs and personal feelings are more important than what the American people think, or who they elected president.

We didn’t realize we had to get Milley’s “approval” before we voted.

This is one dangerous and calculating man, who has a helluva lot of power and needs to be stopped.

Milley claims he was prepared to resign after President Trump went to Lafayette Square, back in June 2020 during the “Summer of Love” violent riots by BLM and Antifa, when they burned historic St John’s Episcopal Church and stood there stoically with his bible, as if to say, “You violence and destruction won’t win, BLM.”

Apparently, THAT upset Milley, but BLM burning down the country was just fine. This guy is such a communist.

Yahoo News reported that after he was seen walking dressed in combat fatigues behind then-President Donald Trump across Lafayette Square after it had been forcibly cleared of Black Lives Matter protesters in June 1, 2020, Gen. Mark Milley, chairman of the Joints Chiefs of Staff, drafted a resignation letter to inform Trump that he intended to step down.

The letter was published by the New Yorker on Monday in an excerpt of an upcoming book by Peter Baker and Susan Glasser, “The Divider: Trump in the White House.”

“The events of the last couple weeks have caused me to do deep soul-searching,” Milley wrote, “and I can no longer faithfully support and execute your orders as Chairman of the Joint Chiefs of Staff. It is my belief that you were doing great and irreparable harm to my country. I believe that you have made a concerted effort over time to politicize the United States military. I thought that I could change that. I’ve come to the realization that I cannot, and I need to step aside and let someone else try to do that.”

Journalist Julie Kelly who has done some amazing reporting on January 6th, read “The New Yorker” piece, and she has a few very powerful takeaways from it she shared on Twitter, which show how Milley was the kingpin of J6, and he and Pence were the guys arranging the coup.

Here’s what Julie said in a series of tweets:

“Mark Milley is a dire threat to the country and Republicans must deal with this immediately. He’s deranged megalomaniac with tremendous power. He thinks he should run the country subverting the will of the people and the elected president. Terrifying”

It’s stunning this hasn’t received more coverage. No video or photos of these leaders being evacuated, no questions about their conversations or decisions, nothing. Milley was running the show on January 6–and people still think January 6 wasn’t pre-planned by Trump’s enemies? 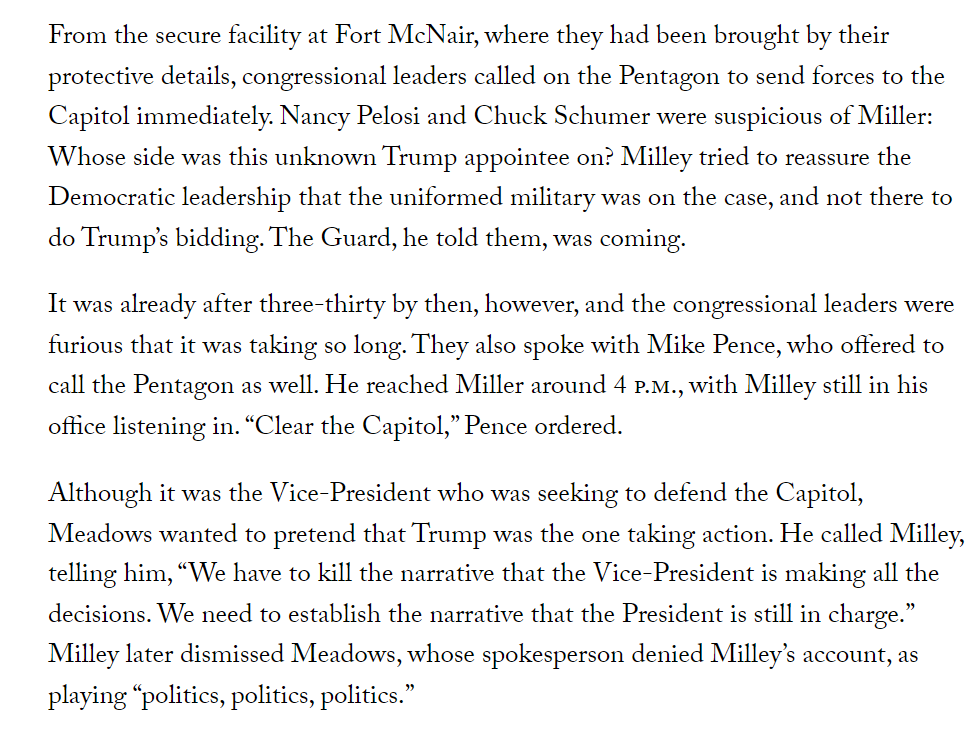 Here’s what people online are saying about this revelation:

“Wow. All starting to make sense”

“The transfer of power was used to plan and plot”

“The whole cabinet is full of Obama left overs”

“The transfer of power is January 20th not January 6th. The more they talk the more they tend to prove that this whole thing was an inside job.”

“Find who sent Kamala to the DNC and you will know who was calling the shots. The fake pipe bomb was the necessary condition to put the violence narrative into play.”

“They certainly run cover for their own!”

“Milley should spend the rest of his days rotting in a military prison.”

“Never forget that Mark Milley is, for all intents and purposes, a Chinese Communist Party spy.”

“He’s committed treason twice. Once telling on Trump to China and second leaving military equipment(aid) for the Taliban in Afghanistan.”

“And the media, including Jake Tapper, think he’s the good guy for admitting he tried to stage a military coup.”

These are the unelected Deep State operatives who need to be purged from our government. And the scary part is — there are so many more “Mark Milley’s” out there… and we don’t even know about them yet. Our government is so corrupt and so dirty, that it would take 10 terms for President Trump to make a dent in it.

If you want to read the piece, you can do so here.