Before we get started here, I want to clarify that I do not think the real Joe Biden is dead and has been replaced by a look-a-like. I also don’t think there are two Bidens, who they change out from time to time.

I also don’t think there’s someone walking around in a very intricate “Joe Biden” mask pretending to be the “president.”

Do I think Secret Service uses decoys or “doubles” of all our presidents in certain security situations?

But this idea that they’ve “manufactured” another Joe, and made him as buffoonish and dopey as the original is just too much for me to contemplate. At the very least, if they really had a double, they’d make him smarter, I’d hope.

So, when I say that Joe looks “shockingly different,” I am not referring to him being a “body double,” I am thinking there’s something else going on, and I want to explore what it could be.

And that’s what got me thinking when I came upon a video someone took of Joe Biden back in July when he was in Delaware, sniffing yet another young child.

But it wasn’t the little kid I was looking at, it was Joe… and it really struck me how ancient and frail he looked in the video.

It looked like he had aged an extra 10 years, no joke… and trust me, I don’t think Joe looks good regularly, by any stretch of the imagination, however, this was just shocking to see.

These photos are just a couple of weeks apart… and that’s supposed to be the same guy. Hard to believe, I get it…trust me; I do. 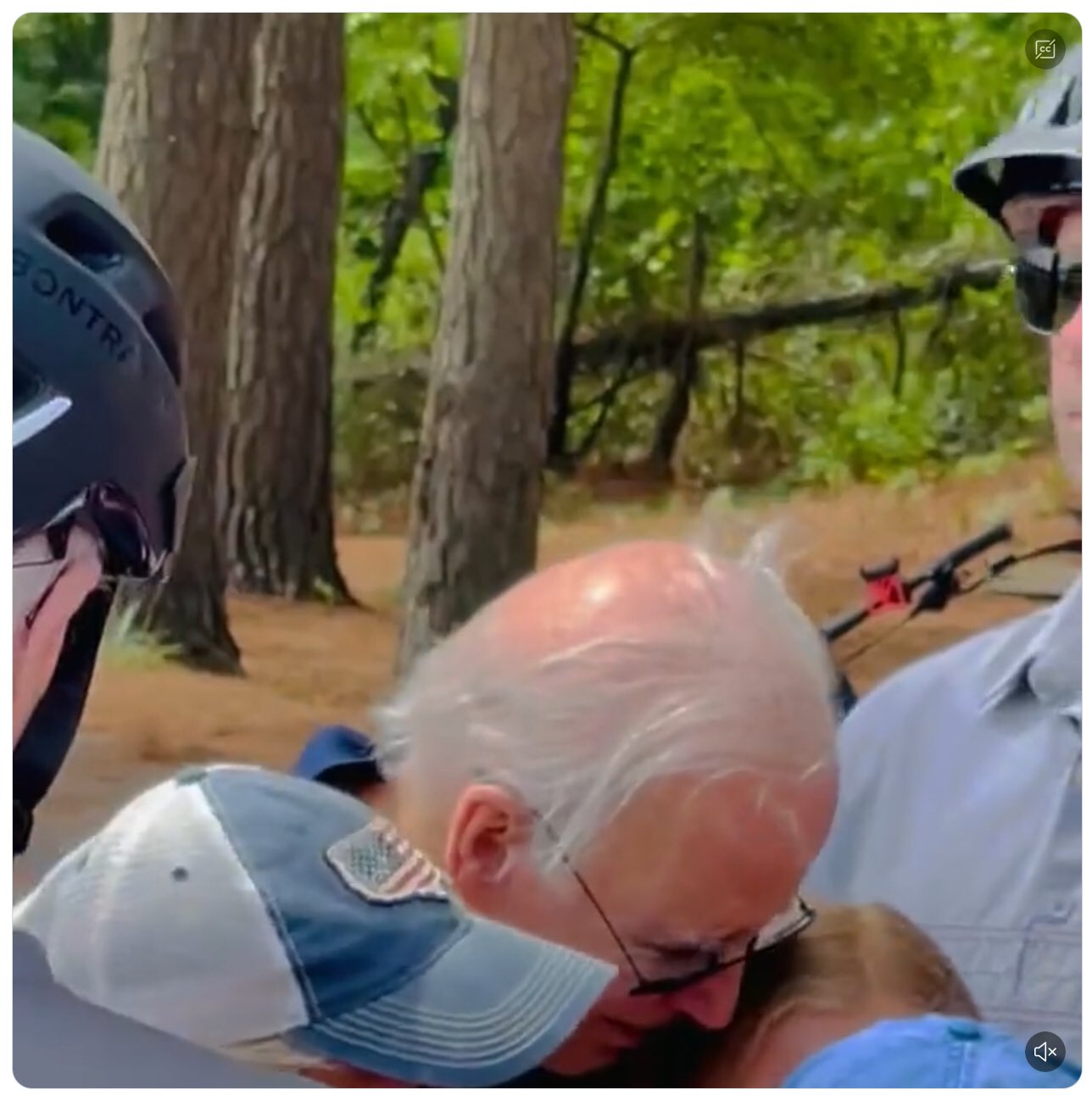 Dad ran into Joe on a biking trail in Delaware and got a live sniffing video lmfao pic.twitter.com/qz9KuEzN9E

So I started to poke around and see what other people were saying about Joe’s differing looks, and yes, there are many people who believe this isn’t the “real” Joe or there are two Joes and I am not here to shame you, I just don’t agree with that… I think there’s something else going on.

I think what we see with Joe is medical and cosmetic.

What does that mean?

Well, I think with whatever Joe is struggling with, cognitively speaking, he has good and bad days and those impact how he looks.

When he’s feeling good, Joe has a little spring in his step, he jokes around a lot, and while his speaking isn’t “good,” it’s much better than the usual train wreck.

There are also times when Joe looks fairly well put together. His hair seems “fuller” and close to his head, his neck seems tighter, and his skin overall has an even color and a healthy glow to it.

But when the bad days set it, the wheels come off the bus.

Joe looks tired, he hunches over more, he has that “lost” look, and his skin is thin and sallow looking, maybe even grayish at times. And his hair looks insane, with most of it gone… and what hair is there is long, straggly, wispy, and his scalp is so bald and shiny in the back. He gives off this “creepy old man” vibe. It’s very off-putting. And overall, Joe looks wrinkly and saggy, and he moves like he’s shuffling through mud.

On top of all that, his words come out all wrong, and he appears lost and confused.

These are the “two Joes” that I see, and as I said earlier, it feels more medical and cosmetic to me than anything else.

For example, I think Joe wears some kind of hairpiece, and the longer stringy bits of hair are either tucked into the hairpiece or simply hair-sprayed into place… This is why at times his head looks as if it has more hair, or at least it’s more evenly dispersed and close to his scalp.

I also think Joe wears a fair bit of makeup, and that’s why at times he has an even glow and color to his skin, and his skin also looks “thicker” and healthier.

I also think they use “tape” on him to gather up the wrinkles, and stop the sagging, especially around his neck area.

And I am convinced he also wears prosthetic pieces on his face. Maybe to give him a more strong, square jawline and fuller cheeks.

Honestly, you’d be shocked at what they can do with makeup and whatnot. You can totally enhance how someone looks and change their age, up or down.

And finally, I think that whatever medical cocktail they give him, will impact how he looks and feels and set the tone for that day.

Here’s what other folks are saying online:

“Okay, that Delaware pic has me convinced Joe wears a hairpiece”

“This is like the before and after of an actor on set.”

“Holy sh*t, Joe does not look good when he’s out of his makeup and costume”

You can’t blame people for wondering what’s going on or coming up with “theories” about this guy.

He makes it easy to create conspiracy theories because everything his team does feels weird and abnormal.

But I hope I offered a little “normal spin” on what is really a big mystery, as to why Joe often looks so different.

I don’t think there two joe’s(we couldn’t be that unlucky), they just have to spend h*urs to get him ready for an appearance and probably so many pills he has to swallow, or injections before he’s somewhat coherent and can stand up**ght,