On Thursday night, Joe Biden delivered one of the most bizarre, hateful, divisive, and “Nazi-looking” speeches this country has ever witnessed. He spent nearly the entire speech demonizing his political opponents, but not on policy or agenda issues — he literally called tens of millions of Americans who voted for President Trump and believe in the America First movement a “threat” to this country. As if wanting Americans placed first, and staying out of foreign wars, and building a wall to stop drugs and human trafficking is a bad thing and a “threat” to this nation. It’s insanity, but it’s also very dangerous.

Joe Biden has been a politician for the bulk of his life, and he’s done next to nothing to support or help the American people. If anything, he’s helped decimate the middle class. But he promised to be a unifier if they elected him this time around. Now, some can argue if he was elected or installed, but let’s just focus on what he said while campaigning: From Biden’s “Soul of the Nation” speech in October 2020: “Instead of treating each other’s party as the opposition, we treat them as the enemy. This must end.”

Yet, this hateful bozo goes on national primetime TV and calls 75+ million people “domestic terrorists” who are destroying the country.

How is that unity?

Meanwhile, Americans are suffering with high inflation, a collapsing housing market, high gas prices, and drug deaths piling up like crazy. But did Biden talk about any of that last night?

And that’s where this Fox News graphic comes in. Honestly, it’s a political nuke just dropped on the dementia-riddled head of Joe Biden. 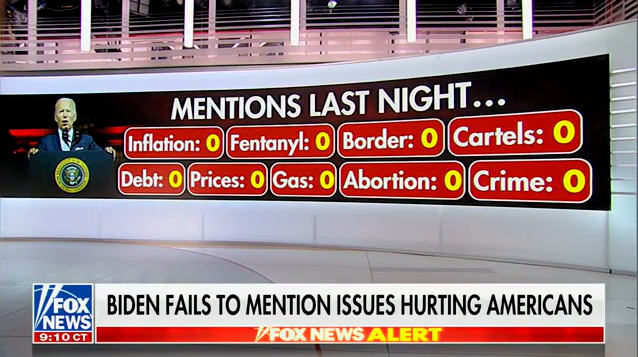 Everything that matters to Americans, all of the things that we’re worried about and focused on, were completely and totally ignored by the Divider in Chief. The only thing Joe wants to do, is save his own political skin. So, he’s trying to paint MAGA as this evil, damaging force, so that Americans will reject America First candidates at the polls in November and instead vote for more of this elitist communist totalitarianism.

Joe doesn’t care about you, or how you’re struggling. He only cares about power, that’s why he’s been a swamp creature for 50 years and is sitting in the White House now, with a brain full of mush.

Biden has turned the midterms into a divisive, dark, and ugly fight, where he’s taken Hillary’s terrible “Deplorable” comment, and amplified it by 10,000 BTUs.

This is disturbing, but it’s Biden’s version of America.