Joe Biden has put all of his eggs in one basket for the midterms. He consulted with his Handlers and rumor has it Frank Luntz, and they came up with a plan of attack leading up to the midterm vote. They were going to go all-in on attacking MAGA, or “Ultra MAGA” or “MAGA 2.0,” or whatever the hell he’s calling us now. And Biden has been off to the races, attacking over half the country as a bunch of “democracy-threatening” terrorists, simply because we believe in the America First movement. It’s really rich hearing a career politician, who’s done NOTHING in over 50 years, except enrich himself and his scumbag family, tell hard-working American patriots that they’re a “threat” to the very soul of this nation. But that’s Biden’s América for ya… a dark, ugly, divisive place.

And how can we forget that bizarre “Hitler-like” speech Joe gave, bathed in that creepy blood-red glow? And he hasn’t stopped yelling since. He’s still out there on the campaign trail, shuffling around, slurring, and having brain freezes and yelling at us. Just recently he called the U.S., “The United States Of Camaro.” Yes, it was a great car, but I don’t think it defined us THAT much. And Joe is still hollering about “democracy.” He even used 9/11 to not-so-subtly compare Trump supporters to the hijackers, who also threatened our “democracy.”

So, how is all of this MAGA hate, blood-red glow, and yelling working out for Joe?

Well, not so good, folks.

When Joe wakes up this afternoon, at around 1 pm, or so, he’ll be greeted with some very bad news… it appears that his entire ULTRA MAGA hate-campaign has been a complete and total failure.

Breitbart reported that a clear majority of 58 percent of likely voters say His Fraudulency Joe Biden should “quit blaming MAGA Republicans and get to working on the economy he ruined.”

The poll comes from Rasmussen Reports in the wake of Biden’s disastrous Red Sermon, where he went to Philadelphia to declare war on half the country, those of us who dare support former President Trump.

By demonizing half the country, Biden, his fellow Democrats, and the corporate media are hoping to do two things: 1) change the subject away from the recession that Biden and his disastrous policies plunged America into, and 2) improve his polling by throwing this fascist meat at the fascist left-wing base.

Biden’s dangerous rhetoric and demagoguery is unlike anything heard in the country by a national leader since the days of Father Charles Coughlin. To the surprise of no one, this did boost his poll numbers by appealing to the Nazis in the violent and bloodthirsty Democrat base.

But back in the real world, at least according to Rasmussen, 58 percent want him to stop with the hate speech and focus on repairing the “the economy he ruined.” This includes 35 percent of Democrats and 54 percent of moderates.

This has been a complete and total flop and will have little to no impact on midterms.

This also leads me to believe that the rumors that Frank Luntz was behind this idea, were true. He is wrong about everything. 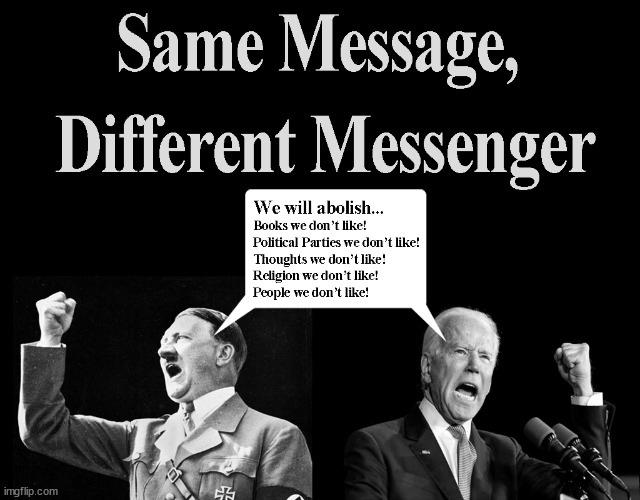