I guess the moral of this story is to be careful what you order online… make sure it passes the smell test. This one woman found that out the hard way when she ordered a pair of pants and ended up getting a “bonus” that she didn’t expect or want. According to this lady, the pants arrived pre-worn, and the reason she could tell someone had worn them is because they had a huge “skid mark” on them. Dear God, no…

TMZ reported that Suzanne Baum claims a pair of shorts ordered online not only came apparently used but with a giant skid mark on them as well … and now she’s demanding answers from the seller.

Baum, a news personality and lifestyle editor say her 21-year-old ordered a pair of shorts from online fashion hub ASOS … but when opening the plastic wrap around the clothing, there was a foul odor of crap.

Suzanne says to her horror, and in a pic she posted, there wasn’t just a smell of poop — but an apparent stain as well — she says the whole thing left her fam, “utterly gobsmacked/retching/in shock!”

What’s more, Baum says she tried for days to get in touch with someone over at the company but has only gotten automated messages.
She felt the best way to get the company’s attention was through posting on Instagram … and the pic is now going viral. 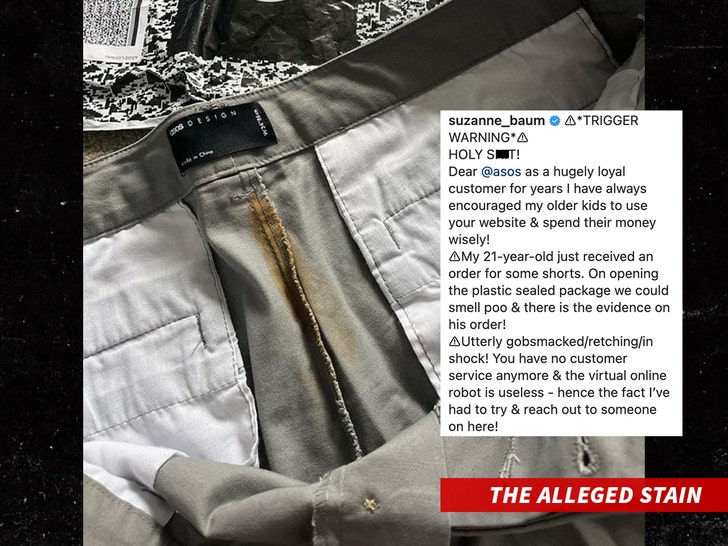 It appears as if someone wore these and then returned them, and the company just packed them back up and called it a day.

That probably happens all the time, but most people don’t leave “skid marks.” Yuk. Maybe I’ll start sewing my own clothes. Ha ha.