A huge chunk of America is still reeling from that bizarre, dark, “Hitler-esque” speech Joe Biden delivered while bathed in a creepy blood-red glow. It was one of the most uncomfortable and weird things I’ve ever seen a so-called “president” of this country ever do. Not only was the speech hateful and divisive, but while Joe Biden is calling MAGA “fascists” and “extremists” he’s standing there literally looking and sounding like the second coming of Hitler. 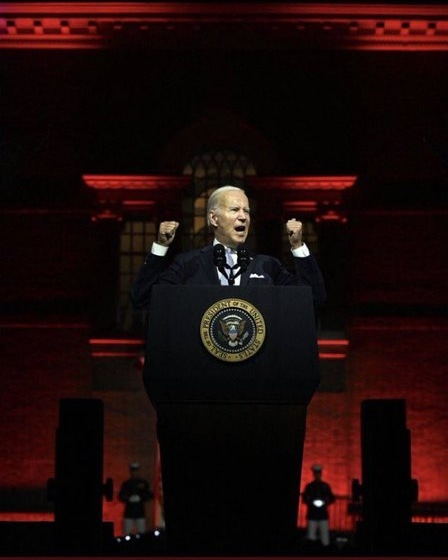 That image will be used in countless 2022 and 2024 campaign ads. But It will still never capture how truly demonic and strange this elderly dementia-riddled man is. Joe Biden has lost his mind. Literally.

President Trump talked about that creepy speech during his positive, happy, and energetic rally in Pennsylvania on Saturday night. Trump called the speech vicious and hateful, and then he went where nobody has ever gone before with a “US President.”

He called Joe Biden an “enemy of the state.”

Here’s what President Trump said: “The most vicious, hateful, and divisive speech ever delivered by a [U.S.] President… you’re all enemies of the state. He’s an enemy of the state, if you want to know the truth. The enemy of the state is him and the group that controls him.”

TRUMP on Biden's speech: "The most vicious, hateful, and divisive speech ever delivered by a [U.S.] President… you're all enemies of the state. He's an enemy of the state, if you want to know the truth. The enemy of the state is him and the group that controls him." #TrumpRally pic.twitter.com/ImTkCtTBMS

The contrast between what Dems are offering — this dark, dystopian communist “climate change” nightmare versus a bright, light, hopeful America First agenda, has never been more clear. America has seen enough now, and they have a big choice to make in 2022 and 2024.

There was a time when the Dem Party was at least reasonable, and you could understand how some of these idiots could be elected into power. We may have not agreed on policy, but they didn’t have this dark, vile energy that they do now.

The mask is off, and America needs to decide what road they want to go down… I hope they choose wisely. I believe they will.