If there’s one thing Joe Biden struggles with, it’s finding his way off a 6-foot stage. I have never seen a grown man have this much trouble finding his way off a stage, but here we are… And while I know we’ve seen him get confused many times in the past, this moment here is by far the absolute most confused and embarrassing. Not only does Joe not know where to go, but he appears to get really confused by the announcer’s voice as if it was someone on stage addressing him. It’s a ghastly few moments of hell for him and the entire nation. We can’t go on like this, can we?

To make matters even more awkward, recently on 60 Minutes, Joe Biden told Americans who are worried about his “mental fitness” to “watch him.” Yeah, just watch him do his “thing.” It’s really sad, but Joe Biden is stuck in the 90s. He doesn’t realize he’s not that schmoozy politician from 1992 anymore. But all of us realize it. Painfully.

During the 60 Minutes interview Joe said something about watching him and how the pudding is eating the proof or something screwy like that… Joe doesn’t realize that the American people have been watching for about 2 years now, and that’s why we think he’s not mentally fit for office.

He looks and sounds like he belongs in a nursing home. I think most of us have actually seen enough, and wish this Twilight Zone episode would end.

"What do you think of people who say you are unfit for the job of President?"

BIDEN: "Watch me… The proof of the pudding is in the eating."

So, okay Joe, we’re watching… show us what you got…

Here’s what he’s got, America:

Where ya going, Big Guy? pic.twitter.com/hvMjZlprWb

“I mean to be fair the stairs may be a little high for him. There also aren’t arrows and secret service pointing the right route for him. Normal daily activities like walking are really hard.”

“Jill needs to be brought up on elder abuse charges! This is sad and embarrassing! SHAME ON HER!”

Sometimes I think we just need to impeach this guy and be done with it, but the alternative of Kamala “Word Salad” Harris sounds equally as bad.

Either way, for the next 2 years, we’re screwed, but midterms will help. It’ll take a good chunk of his or her power away. 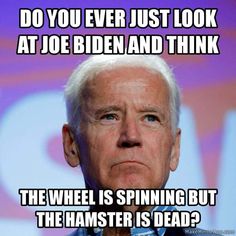