So, there’s been a lot of talk about who is actually running the Biden admin, because we all know it’s not bumbling Joe. Many people believe his chief of staff Ron Klain is in charge, and while I think Ron makes a lot of (really bad) decisions, I don’t think he’s calling the guy calling the shots. He’s a flunky. Other people think it’s Susan Rice or Obama, and both of those are actually right, but there’s a bit more to the story.

Investigative reporter Julie Kelly, who does AMAZING work for American Greatness, and who has covered the J6 trials and the Whitmer trial with so much care and insight, has cracked the case on who is actually running Joe’s so-called “presidency.” Yes, it’s Obama, and yes it’s Susan Rice, but that’s just part of the picture. There are actually three women inside Joe’s admin who are working together to operate this sh*t show for Obama, and Julie identifies who they are.

Obama nicknamed them “The Furies.” 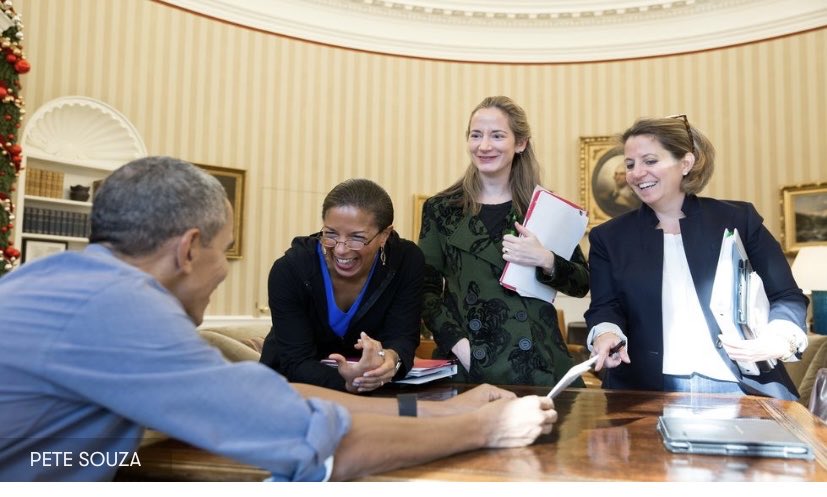 Julie goes on to say:

“Obama dubbed his all-female senior national security team “The Furies.” Avril, Lisa, and I commanded significant power behind the scenes and were the three women Obama most loved to tease. Never before, I am sure, had such small packages wielded such national security punch.”

“The three of us were quite conscious of the rare gift we enjoyed of having two other strong, supportive women as our closest colleagues. Between the three of us, there was always candor and trust.”

So, Obama got his third term, and that’s his team. Nice to finally know.

“They are the ones running the country right now. Accountable to nobody.”

“They never missed a beat, just waited for Joe to let them back in the door and resume biz as usual. All, including Big O (now in his 16th year of sedition and treason) should be tried for high crimes.”

“None of them ever left!”

“Obama stayed in DC, Rice is there, and Ron Klain is basically the Prime Minister.”

“Interesting that Joe is being led around by a bunch of women, including the First Lady.”

Let’s not forget what Obama said… trust him when he tells you his plans… he wasn’t joking.

If you want to read more of the article that Julie Kelly highlights you can do so here.