Well, I am sorry to report that Joe Biden is back to inappropriately touching and talking to young girls. It’s as if Joe’s dementia made it so he can’t stop his perverted urges, even though he knows there are people and cameras all around. There is no reason on planet earth, that this creepy old man should be anywhere near young girls. But he’s always around them, lurking, sniffing, and saying some of the creepiest things ever.

I want you to pay close attention to how slowly, and methodically Joe places his hands on the young girl’s shoulders. It’s as if he’s been holding back, and at that moment, he can’t hold it in anymore. There’s something very predatorial about how Joe reaches out to her. It’s as if he’s so overcome with this burning need to touch her. And it’s not like we haven’t seen this before. There’s a whole video library of Joe Biden inappropriately touching, nuzzling, and sniffing girls. And let’s not forget that his own daughter says that she and her dad took “inappropriate” showers together when she was young.

Professor @anthonyzenkus:
"It's really hard to just look at somebody and say: "That person is a predator". What you have to do is look at the behaviours, and listen to the things that they say".

Me: Take a long hard look at Joe Biden. And listen.

It looks like the story of Joe’s life is “inappropriate.”

The left thinks this is perfectly normal behavior. They don’t see anything wrong with an old man invading the space of a young girl. Ironically, back in 2019, after several women came forward, complaining about how Joe sniffed and nuzzled them. In response, Joe vowed not to “invade” women’s personal space ever again.

I guess that promise doesn’t apply to helpless young kids.

This latest incident happened in Irvine, California, and according to the person who recorded it, Secret Service didn’t want him capturing what went down.

“Joe Biden grabs a young girl by the shoulder and tells her “no serious guys till your 30” as she looks back appearing uncomfortable, secret service appears to try to stop me from filming it after Biden spoke @ Irvine Valley Community College”

President Joe Biden grabs a young girl by the shoulder and tells her “no serious guys till your 30” as she looks back appearing uncomfortable, secret service appears to try to stop me from filming it after Biden spoke @ Irvine Valley Community College | @TPUSA @FrontlinesShow pic.twitter.com/BemRybWdBI

“Biden’s so damn creepy and inappropriate with children!! Makes my skin crawl. Btw, is Secret Service there to protect him or to protect his reputation?!”

“Serious question… Why does he always do this? I can’t tell you how many videos I’ve seen of him telling little girls stuff like, “Remember, no dating until you’re older”, etc… It’s just flat out weird.”

“Why does he make the distinction of no “serious” guys? If I were gonna make a joke like this, I’d just say “no guys” not “no serious guys”. It’s minor, but making that distinction is…unsettling to me. (Basically, it’s par for the course for him)”

“He has no concept of social cues. Look at the body language, the way she pulls back as she’s clearly uncomfortable all the while he leans in further. Inappropriate. Creepy.”

“Since he very frequently does stuff like this when he knows cameras are around, just imagine what he does behind closed doors”

“I’m sorry but that is not presidential. It’s freaking creepy”

“If a man put his hand on my daughter’s shoulder like that, president or not, I’d be throwing punches. It’s creepy and gross.”

“Don’t touch a girl without her permission. You don’t know how she could have taken it. She might feel attacked. Far too many men think anything goes with girls and far too many girls have been assaulted in one way or another. So respect them and make them feel safe.”

“The irony is, if Trump said something even remotely like that to a young girl. The left would have attacked him for not using a pronoun, assuming the girl is straight and for suggesting she be a hoe until 30. You were waived off, because he was clearly leaning in for the sniff.”

What a creep. That poor girl doesn’t want his repulsive hands on her, nor him breathing into her face. And what business is it of his as to who she dates and when? He’s disgusting and inappropriate, among many other things. 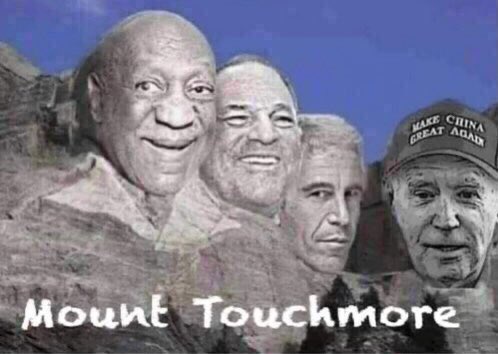