Dems were convinced that abortion would be the issue that would save the midterms. In their twisted little brains, abortion would fend off the impending Red Wave, and the polls would be flooded with obese blue-haired women, with nose rings and rainbow-colored eyebrows, saving the country from a “Handmaid’s Tale” reboot. And while I know midterms are still a month away, I am here to tell you that once again, Dems have miscalculated and made a very big bonehead political move.

Abortion isn’t going to save them. And now we have some hard proof to back it up, thanks to Monmouth and their poll from last week… and when I say this is ugly for Dems, I am not kidding. It’s a very, very red bloodbath, folks.

Monmouth comprised a list of the top 12 election issues.

Let’s take a look at it, shall we?

Abortion doesn’t come in until #7, right under Infrastructure,” for crying out loud.

Now, Monmouth also breaks down how important each issue is to Americans and how they feel Joe Biden has handled each issue. The ONLY issue where Biden breaks into the 50 percent bracket is COVID, and I find that very hard to believe since more people died under Biden, and he had that disastrous vaccine rollout, and all the tyrannical rules, not to mention the piles of misinformation and confusion he spread.

I think people are just so over it, anyway, and threw Joe a bone.

It’s second to last on the list. Nobody cares about COVID anymore… but they should care about how it was marketed to us, and what the “dear leaders” did to destroy the country. That is something we must never brush aside, and that’s also what the midterms are about. 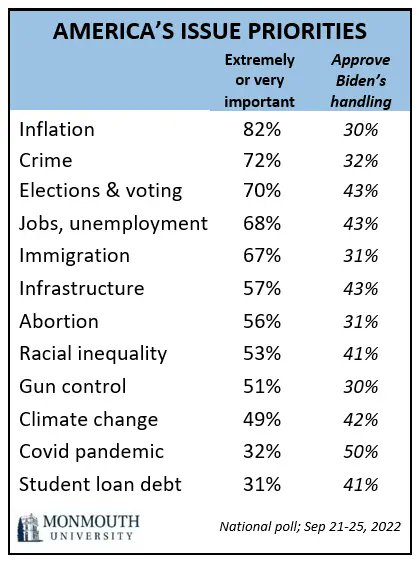 Look at how many Dems disapprove of Biden’s abortion handling. After all, it was on HIS watch when Roe v Wade was overturned. That will be his legacy, which is actually a great thing, but not to his abortion-loving base. To them, he’s a massive failure.

But here’s the thing… as with everything liberals get their hands on, they pushed the abortion thing way too far.

Women “shouting” and “celebrating” their abortions was just gross beyond words. As a woman, I can tell you, I don’t relate to that nor do I have any kinship with that mentality. In my opinion, I think abortion should have always been a dire/last resort type of decision. We have so many birth control options in this country, I really can’t wrap my mind around why abortions are so needed by so many people.

And when the left went to the “abortion up until birth” stuff, that was it, they completely lost me. That’s now 1st-degree murder. As someone, who used to be a silent “pro-choice” person, I can tell you that all this stuff from the left made me reevaluate what the hell I was thinking, and I went from that quiet “pro-choice” stance to a very strong and loud “pro-life” stance.

As I said before, I always believed abortion should be the last resort type of choice, but that’s not how the left sees it.

Honestly, the left “radicalized” me, and made me flip. I just can’t relate to these bloodthirsty women, who wear the killing of innocent babies as a badge of “feminist” honor. It’s disgusting… and I know I am not the only person who feels this way.

As a matter of fact, my daughter, who was also quietly “pro-choice” has had the same “radicalization” as I did. She’s now staunchly pro-life.

So, this idea that abortion was going to save Dems and unite all these women, isn’t reality. Things have gone too far and gotten too dark and ugly. It’s the “radicals” who are pushing this now, and it’s gone so far off the rails, it’s not even funny.

Besides, why should red states, where most people do not support abortion and have very strong religious convictions against it, offer this service? If someone in a red state refuses to practice responsible sex or has an issue that requires an abortion, they can travel to a blue state. Maybe they should move there?

So, yes, there will be a Red Wave… It’s coming, no matter what corporate polls or the media says. The only thing I ask of you is not to sit this one out.

This is an all-hands-on-deck scenario. We need to come out in droves and flood the polls and make our voices heard so loudly, that they have no choice but to listen. This is our first real chance to send Joe, and all his communist buddies a really clear message about how we all feel about them and their communist agenda.

Don’t stay home. Come out. Be present and never surrender your voice or your vote to these radicals.