Okay, before we delve into this horrific debate, let me just say that, while I don’t like Fetterman’s politics, I think he’s a gigantic Marxist, and I believe his communist political views are a threat to everything this country stands for, as a human, I do feel compassion for him because he’s clearly a sickly mess and has not recovered from that stroke. This man is ill, and broken, and should be at home, resting, getting therapy, and being under a doctor’s very watchful care… not running for Senate. It’s shocking to me to see political consultants and pundits back these sickly people and place them under the cruel spotlight, but it’s even more sickening to see wives do this to their husbands. And yes, Jill, I am talking to you, too.

You know things are bad when Fetterman opens the debate by saying, “Hi. Goodnight, everybody.”

So, what’s going on with the Democrat Party? Why on earth are they putting brain-dead candidates out there? Well, I did a story not too long ago and partially answered this question:

Why are Dems so gleefully parading out mentally challenged candidates? It seems like a question with no good answer, but trust me, there’s an answer, and President Trump’s former speechwriter and owner of revolver.news, Dr. Darren Beattie, has the answer.

Here’s what Darren said: “There’s method to the madness of parading literal brain dead morons as political candidates The brain-dead aspect appeals to the democratic passions of the mob But also means that the individual in question will be entirely controlled by unelected handlers Democracy in action”

I think Darren hits the nail on the head, and he’s right. But with Pennsylvania and Fetterman, I think there’s a bit more to this story.

But before I get into that, I want to share a couple of clips from the debate that I found on TikTok.

And I think this gentleman summed up everything perfectly.

I think we can all see why Fetterman didn’t want to debate Dr. Oz. And his camp tried to brace us for this by putting out statements saying Fetterman wasn’t good at debates. He was more a “normal guy” who talked like normal people, not a slick politician or TV doctor.

Well, I can tell you this much, Fetterman doesn’t talk or think like a “normal person.” He thinks and talks like someone who has had severe damage from a very serious stroke.

And speaking of that stroke, he is not fit to serve, and I don’t care what his quack doctor says.

He should have his medical license revoked.

Fetterman can’t even correctly tell the American people that he’s fit to serve. He calls his doctor a “doctoral” and then makes zero sense as he trails off, rambling nonsense.

John Fetterman: "My doctoral believes that I’m fit to be serving and that’s what I believe is where I’m standing."

So, what’s happening? We saw what Darren Beattie said about Dems running these mentally impaired candidates, but as I stated earlier, I think there’s something else going on in PA, and you can call me a conspiracy theorist all you want, but I truly believe this is the plot:

Dems hope to get Fetterman elected, so they can have him step down for medical reasons shortly after he’s elected, and then have his wife Gisele take over his seat.

And I am not the only one who thinks this. Lots of people do, including Dr. Oz.

Dr. Oz actually questioned the possibility of this happening during a recent interview. Dr. Oz argued that there was something in the works that could place Gisele Fetterman in the Senate in place of her husband. And he said that voters should be made aware of that possibility prior to the November midterm election.

Also, Rolling Stone even referred to Gisele Fetterman as “the de facto candidate” in a recent profile.

So, that is what I think is really going on in PA. I think they’re trying to push this broken, sickly man through, so they can take him out and put his wife in.

Joe Biden even said it himself while he was in Pennsylvania campaigning for Fetterman:

“Biden to John Fetterman’s wife: “You’re gonna be a great lady in the Senate.”

"You're gonna be a great lady in the Senate." pic.twitter.com/xDqiY35ucc

Interesting, right? Sounds like Joe may have accidentally given away the game.

This entire Dem PA Senate race is sketchy and weird, and once again, the American people deserve better.

Clearly, Fetterman isn’t fit for office. I mean, can we all finally be honest about this, and say it out loud? There is NOTHING wrong with speaking the truth, even if it hurts someone’s feelings. The truth shall set you free, and it will also save the country. 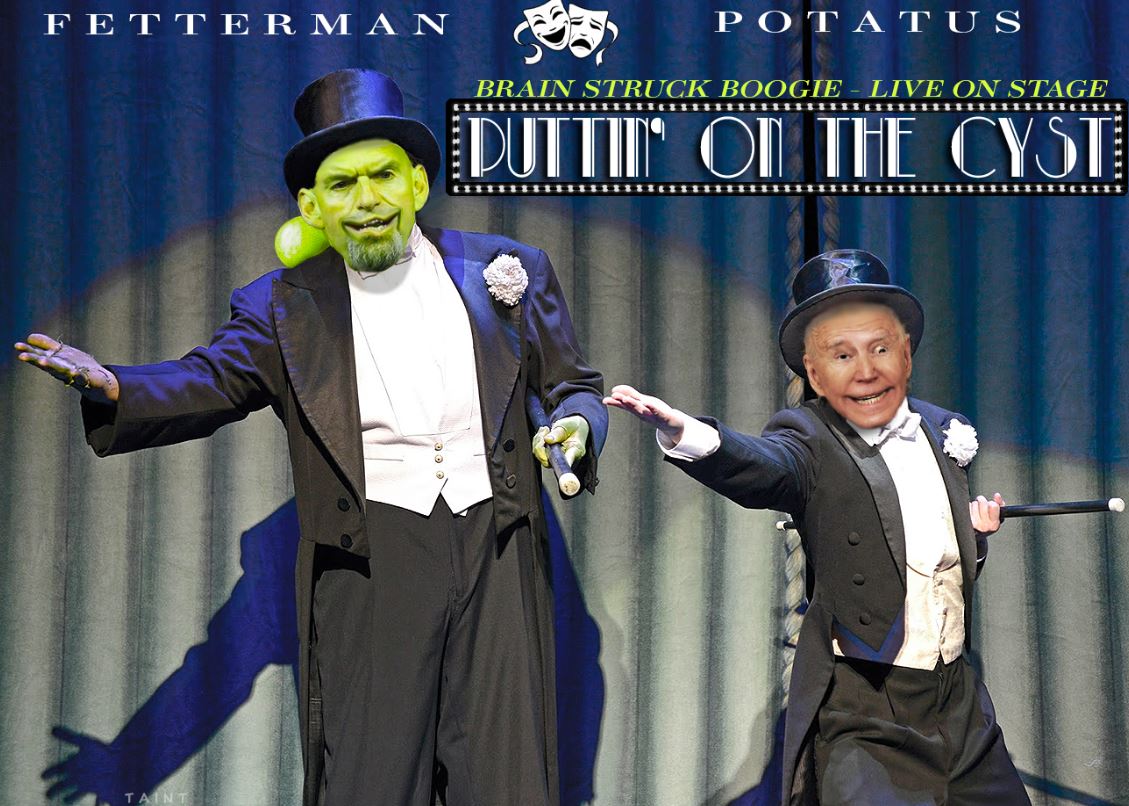