If there’s one thing you can count on, like death and taxes, it is liberals being shameless hypocrites. But for them, everything they do and say is justified, as long as it means the evil “Orange Man” is gone. What really amuses me, is that back when President Trump was in office, Dems tried to make him out to be a “crazy/mentally sick” guy. Simply absurd. Obviously, it never caught on beyond the left’s radical bubble of weirdos, but they really pushed it hard.

On the other hand, poll after poll shows that a vast majority of Americans are worried about Joe Biden’s mental health, and most believe he’s not fit to serve.

But what happened the other day has changed everything… Joe Biden, who was at an event for a congresswoman who died in August, and whom he was naming a VA hospital after, got really confused, and thought she was still alive, sitting out in the crowd, and actually started calling for her.

Here’s what went down:

Jackie Walorski died on August 3, and Joe Biden is signing a bill to name a VA hospital after her, but he thought she was still very much alive. Our so-called “president” is senile. If you don’t see it by now, you can’t be taken seriously.

And the worst part? Apparently, a tribute video to the late Congresswoman Walorski was played at the event right before Joe Biden spoke.

This guy is a goner.

NBC News reported on the scary dementia moment, calling it a “gaffe.” No. It was not a gaffe. It was dementia, just like all the other times Joe’s done stuff like this.

Joe Biden on Wednesday mistakenly asked whether the late Rep. Jackie Walorski, who died in a car accident last month, was at a White House event that she helped convene.

Biden made the gaffe as he delivered remarks at the White House Conference on Food, Nutrition, and Health, where he publicly acknowledged elected officials like Walorski, R-Ind., who helped organize the gathering.

At one point Biden asked, “Jackie, are you here? Where’s Jackie?” as he looked out and scanned the audience. He did not correct his remarks.

“Jackie, where’s Jackie?,” Joe Biden says about Rep. Jackie Walorski who died in a car accident a few months ago.”

But did that bother the liberals? The same liberals who were so outraged over President Trump’s so-called “mental illness?”

Washed-up TDS actor George Takei actually called out Trump’s “mental issues” in 2017, saying it was “fair game” to go after him for it.

But then, in a tweet he posted on 9/29/22, regarding Joe calling out to a dead woman, he was very unbothered by it and suggested we all give Joe a break, it’s really no big deal… 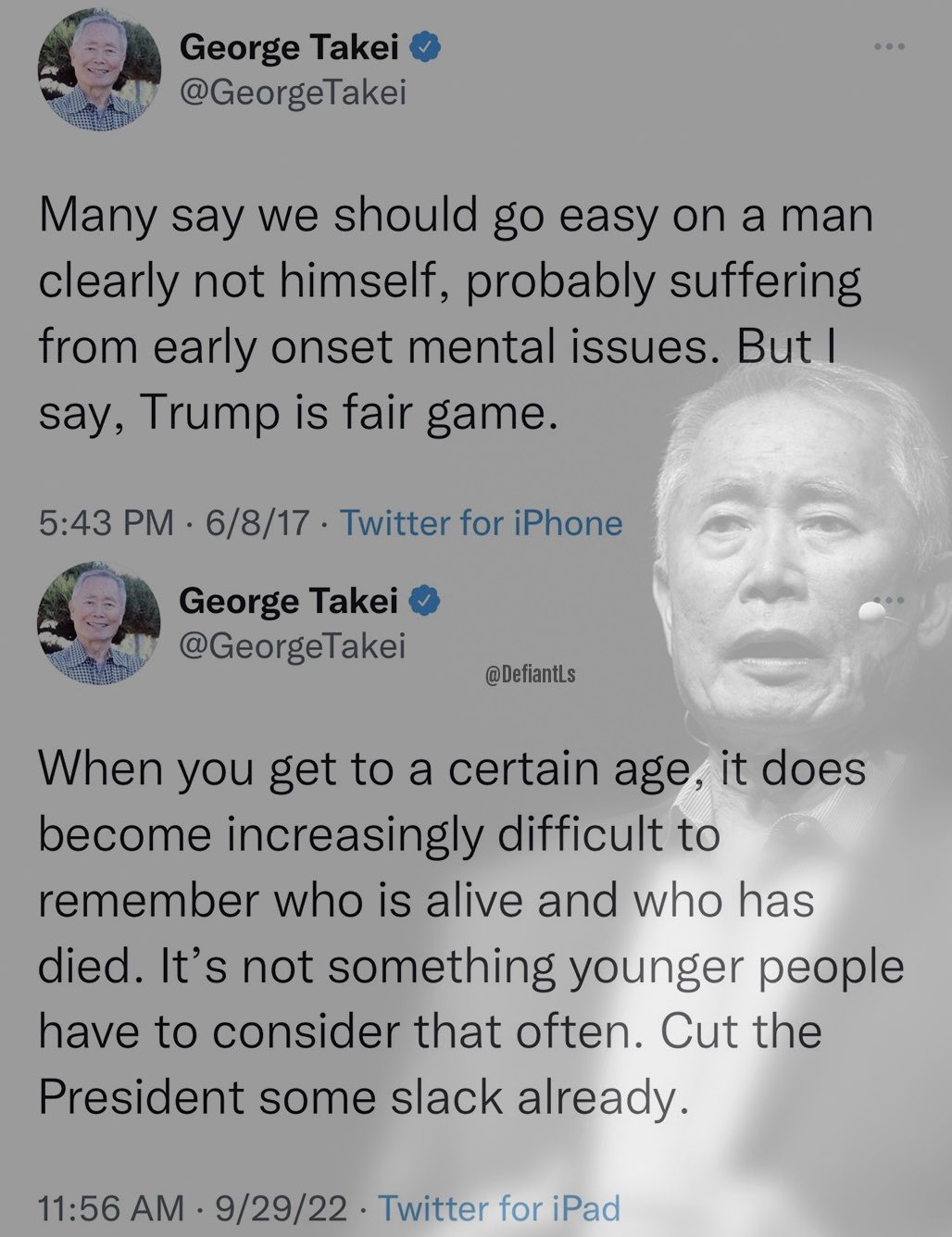 The shameless hypocrisy is stomach turning. No wonder nobody can take these liberal elites seriously.

“Yep. It’s really hard to remember whether someone who just died a month ago is alive or dead, especially when the bill you’re promoting is named after her and you’re gonna see her family in 2 days. Nothing to see here folks. Move along.”

“No mercy for the imposter!”

“This guy has taken more L’s this year than my Cincinnati Reds have.”

“Oh hypocrisy, thy name is Sulu.”

“If he didn’t have double standards, he wouldn’t have standards at all.”

“When you get to be Takei’s age it becomes increasingly difficult to remember what you said yesterday. Cut the hypocrite some slack.”

“Nobody does hypocrisy better then liberals”

“Translation: Cut him some slack because he’s a Democrat”

“It’s not like this is the first “dementia” thing Joe has done. We’re in the millions by now”

“Fair enough. In his defense, I keep forgetting George Takei is still alive.”

“To be fair, when you get to a certain age & are living off a show you did in the 60’s & Comic Cons, it’s hard to remember a tweet from a few years ago.”

“Every day this man proves that after all is said and done, he was just some average actor on some TV show. Deep down inside, he knows he is broken, completely.”

If we were a normal country, this senile man would have never been installed in the White House. And at this point, even after being installed, he would have been removed from office, using the 25th Amendment right after the Afghanistan debacle, where his ineptitude, caused the death of many people, including 13 American heroes.

But sadly, we’re not normal. It feels as if we’re all living in an episode of South Park.

I believe that Joe Biden has dementia, and he is not mentally fit to serve and he should be in a nursing home.