Joe Biden isn’t doing so well. The other day, he was trying to speak to a woman who died back on August 3rd. As we’ve said so many times before, Joe Biden doesn’t know what’s going on. He’s a lost, confused senile man, and you really have to wonder, who the hell is driving this ship? One thing Biden has been having the hardest time with is finding his way off small stages, or knowing where to go after he’s tried to speak at a podium.

It’s becoming an increasingly worrisome problem for Team Joe, because once again, it’s something everyone can see unfold, and there’s really no good excuse for it. Just like the dead woman, how on earth do you explain away something like that? Joe was at a memorial event for her, he’s supposedly naming a VA hospital after her, and they had just played a memorial video of her right before Joe came out to speak, and what does this fool do?

He looks out into the crowd and asks where she is… a couple of times, no less.

When stuff like that happens, there’s no escaping the “dementia talk.” They can blow off all the marble-mouth comments, forgetting stuff, or getting the facts wrong, but when you’re at a memorial, and you don’t realize the person you’re memorializing is actually dead, there’s literally no excuse that will work to cover it up. It’s your brain. It’s broken. Period.

But of course, KJP tried. Her excuse was that Jackie (the congresswoman who died) was at the forefront of Joe’s mind, and so, it was just a slip of the tongue, if you will.

And nobody bought that nonsense, not even the press who are literally willing to buy just about anything in order to help provide cover for Joe Biden.

One reporter said he thinks of John Lennon, but doesn’t forget that he’s dead. Well played, well played. Where have these people been for the past two years?

The same thing goes with Biden’s inability to find his way off a 6-foot stage. And it’s getting worse by the minute. Just the other day, Biden was at a FEMA presser, and again, he didn’t know where to go and started shuffling off in the wrong direction right out into a sea of workers at their desks, who all looked really confused watching Joe shuffling towards them. The FEMA official at the podium, actually tried to grab him before he went the wrong way, but Oblivious Joe just kept aimlessly wandering off.

Again, he doesn’t have a bloody clue what he’s doing.

Well, it appears the Handlers have recognized this as a big problem and are now using Jill — the “nursemaid/wife” — to help Joe find his way offstage. If you pay attention, you can see her doing this a lot more lately.

In this video, you can even see Jill whisper something at Joe, and then he turns around, all giddy and puts his arms up in the air like a toddler who finally figured out a puzzle, and he shuffles off in the right direction.

This ghastly moment is right up there with talking to dead people in terms of bad “dementia” optics.

Would Joe Biden even be able to remotely operate without his caretaker Jill and his flashcards?

“Jill is his abusive nanny”

“This is absolutely ridiculous. I am getting so angry”

“It’s pretty sad how much we see the First Lady. Never have I seen a President’s wife have to cart her husband around so much. No one finds that strange?”

“What was that hand movement? Trying to get reassurance that’s which way he’s supposed to go?”

“And claps like a seal to get his attention. Look at her body language as he moves off stage. She knows…”

“Her expression says all we need to know.”

“It’s sad, completely embarrassed this is the person that speaks on Americas behalf”

“Hard to believe we’re living through the worst president in American history.”

“Is this honestly the best this country can do?”

“And the way she dropped her head when he started talking to the reporter…lol… agonizing over him opening his mouth in that moment … but old Joe pulled it off that time. Lol.”

“This is really alarming.”

“Jill the caretaker, looks like her patience is wearing thin…”

“Look at everyone do there best to guide him. Even the second man had to raise his hand to show him where to go. Jesus Christ.”

Everyone within 300 feet of Joe Biden has to be ready to play “adopted grandchild” and help him. He is treated like a child because that’s exactly what he acts like. 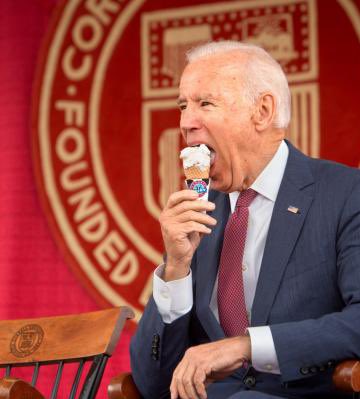