Joe Biden is doing some last-minute very desperate “Hail Marys” just before midterms to stop the RED WAVE from hell that’s coming for him and his communist party. And just like a typical sleazeball politician who thinks the public is stupid, Joe’s trying to pack in as much as he can just 2 weeks before election day. One thing he just did was a disastrous interview with MSNBC. He had such a massive “brain freeze” during the interview, that most people were downright shocked that MSNBC aired it. It was that damning.

And from that same interview is another confusing, blabbering moment.

It started when the reporter asked Biden how Kamala was doing.

That’s a “gotcha” question, right? We know the two of them can’t stand one another, and we also know the American people like Kamala even less than they like Joe Biden, which is really saying a lot.

So, when he was asked about her, Joe Biden didn’t have anything original or “real” to say, so he went to an old favorite of his — he claimed she has a backbone like a “ramrod.”

Yep, this is a schmoozy, phony line Joe likes to use, just to pacify everyone, and make you think the person he’s talking about is a real “go-getter.”

Well, if that were true, Kamala would be at the border right now, fixing it, right?

Here are some examples of Joe’s use of the term “ramrod.” 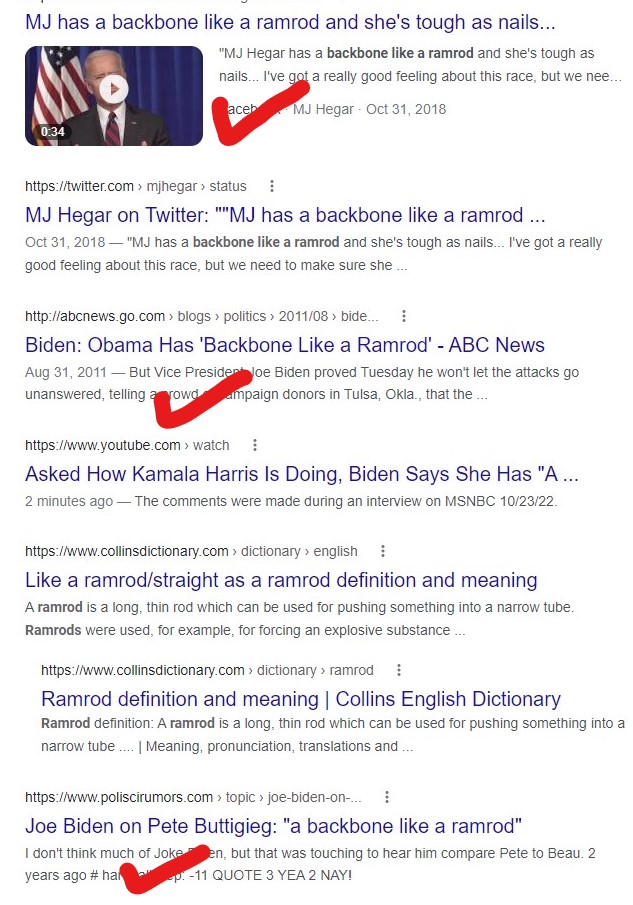 Kamala stinks, and everyone knows it. She stunk in the Dem primary in 2020, and honestly, she stinks even more now.

This is what the Washington Examiner wrote about Harris’s failures back in April 2022, it’s probably even worse now.

Vice President Kamala Harris has performed so poorly that even her home state thinks she has been terrible.

A poll from the University of California, Berkeley Institute of Governmental Studies and the Los Angeles Times puts Harris’s approval in her home state of California at just 35%, with 45% disapproving. Harris has dropped slightly from her already awful 38% approval just two months ago. For comparison, GOP House Minority Leader Kevin McCarthy has 28% approval in the Democratic-dominated state. Harris is barely more popular than a Republican in California.

What’s more, Harris is floundering in the Bay Area, where she started her political career and served as the district attorney of San Francisco. Harris’s approval in the Bay Area is just 38%, well below House Speaker Nancy Pelosi’s 52% approval.

Harris’s media allies have cried racism and sexism every time her failures have been noticed. This raises several questions: Is California a bastion of racism and sexism? Is the Bay Area home to hateful bigots who want the country’s first black female vice president to fail? Or is Harris simply a terrible politician who failed upward into the vice presidency because of President Joe Biden’s racial and gender quotas?

Harris is a political train wreck. The Democratic presidential nomination was hers to lose in 2020. She entered that race with a strong resume for the diversity-obsessed Democratic Party. Yet she lost it, badly: Harris was out of the race before the first votes were even cast. She was bullied in debates by candidates who understood what they were talking about. Even friendly journalists have given Harris trouble since she became vice president.

It’s no coincidence that no matter how poorly Biden polls, Harris polls worse. Time and again she has proved to be out of her depth, with little to add to the conversation. Her incompetence stands out in an administration that has made incompetence its defining feature. Even Californians, who elected Harris to serve as attorney general and as a senator, can see what a mistake it was for Biden to select her.

But to Joe, she’s just another “ramrod.” Something he says about pretty much everyone. But my favorite part is how he tries to brush off her terrible poll numbers, which are even worse than his, and he can’t do it. He gets all flubbed up and turned around, and eventually just gives up.

BIDEN: "She has a backbone like a ramrod…there isn't any public figure that is, you know, 60% favorable ratings, I mean, you know, most of, and, but—she's doing a great job." pic.twitter.com/sJZRr4OrJH

Joe also said they have lunch together once a week. Well, that’s yet another LIE:

I don’t know what the Handlers were thinking. They should have done the smart thing and kept Joe as far away from midterms as humanly possible. Instead, he’s been shuffling around, confused, and bungling everything up.

The Dems deserve what’s coming to them.