Something feels really off about this Paul Pelosi attack. The whole thing makes no sense. We’re to believe that some random guy can just waltz into Pelosi’s house? Doesn’t she and her family have Secret Service protection? And I’d imagine they have heavily fortified security, right? Well, apparently not, because some crazy Berkley hippy was able to wander onto the property and “attack” Paul Pelosi with a hammer.

Here’s where it gets weirder. From what I understand, there were officers going to Pelosi’s house to do a “wellness” check on him, when they arrived they saw the hippy hitting Pelosi with the hammer and they stopped him.

Why were they doing a wellness check? Who called and requested one, and why?

Here’s more on the hippy who broke into Pelosi’s home. He’s a former “Castro Nudist,” a hemp jewelry maker, and a protester.

Oh yeah, that has MAGA written all over it. 🙄

Here’s a photo of David DePape.

He was probably mad at Pelosi for supporting WW3.

This is another supposed photo of the attacker:

Notice the anti-war message on his torso.

Here’s more info about the intruder: 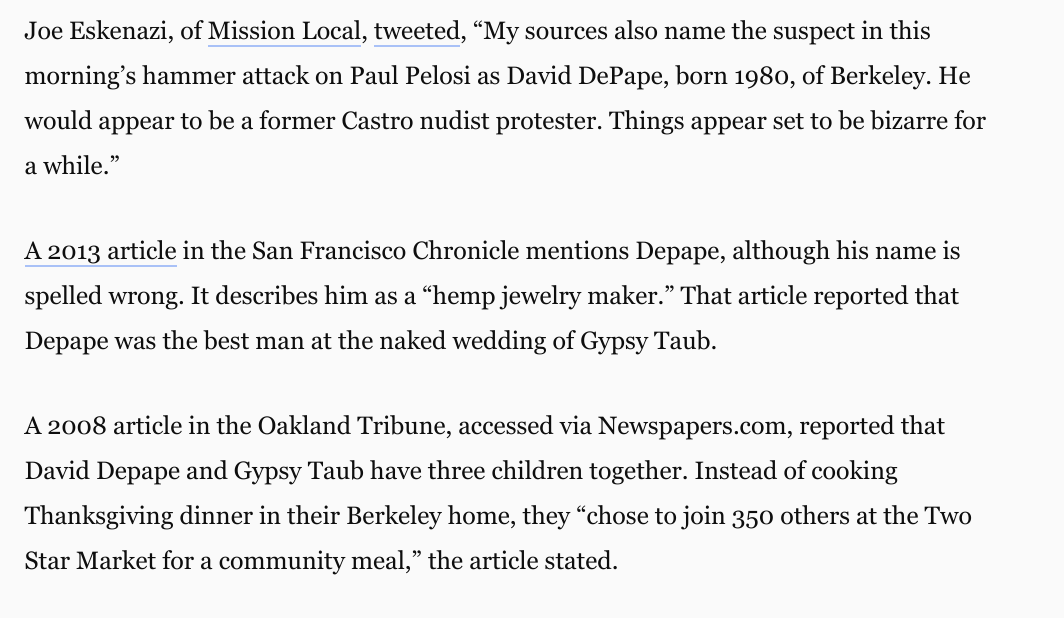 I gotta say this much, the feds and media will have one helluva hard time making this guy into a “MEGA MAGA” Trump supporter. But they’ll probably try.

Many people are finding this entire story hard to swallow. Here’s what people online are saying:

“What really happened to Paul Pelosi? The Pelosi home is surrounded by bodyguards 24/7 from the Califoria Highway Patrol, the Secret Service, and the San Francisco Police Department. It is not credible that “someone broke in” and attacked Paul. Domestic violence? Family feud?”

“Maybe the exercise machine malfunctioned, causing injuries -like what happened to the late Harry Reid?!”

“Sounds like Jussie Smollett type story. Not adding up!”

“The Speaker of the House is number three in line for the presidency. It is preposterous that some random could just break into her private home. There’s a lot more to the story, and you’re being told a lot of lies.”

“If he is driving around at night drunk with minor females, who knows?”

“honestly, my very first thought was…’well nancy has had enough’.”

“This is what happens when you don’t pay the hooker.”

“Really odd how Nancy wasn’t there.”

“Even without the rumors this is a very strange incident.”

“Let’s see what the story will be. This could get interesting.”

“Thanks for bringing that up…I have no idea if Paul Pelosi has bodyguards or secret service, but I imagine he’s at least got an alarm system alert straight into the police. And it wouldn’t surprise me the Pelosi’s have a safe room.”

“The mansion is also surrounded by a wall and, no doubt, has plenty of security/alarms & perhaps even a safe room, as many mansions do. Visit with a hooker that went bad? Now THAT I would believe.”

“My guess is he got drunk, took an Ambien, sleep walked, and fell down a flight of stairs.”

“The protective force follows HER. She was not in S.F. at the time.”

And Wayne Dupree makes a good point here… Apparently, the bad guy got the hammer away from Paul Pelosi. So, Pelosi was attacking the man?

Again, this is really odd and isn’t adding up. There’s a lot of this story that’s missing.

“Police responded to a wellbeing check and found Depape and Paul Pelosi, 82, struggling over a hammer. He said officers then witnessed Depape pull the hammer away from Pelosi and “violently assaulted” him …oh, he pulled the weapon from her husband and beat him with it”

Police responded to a wellbeing check and found Depape and Paul Pelosi, 82, struggling over a hammer. He said officers then witnessed Depape pull the hammer away from Pelosi and "violently assaulted" him

…oh, he pulled the weapon from her husband and beat him with it 🤔😂

Our media is a mess. Now, we’re told it was “surgery” not “brain surgery.”

UPDATE: We’re now told the man who was arrested, was in his underwear:

Fox just reported the suspect was arrested in his underwear.

Politics aside, we will pray for Paul Pelosi.

But that doesn’t change the bizarre nature of this story. I don’t blame anyone for thinking this whole thing sounds really strange and isn’t “adding up.”

That’s on the media, and officials, who have taken the public’s trust and crushed it into dust.