Joe and his warmongering cohorts were really excited that WW3 has started when a missile went flying over to Poland and killed two people. Instantly, warmonger and money-launderer Zelensky, claimed it was Russia. As you know, Poland is a member of NATO, and this action, if it was from Russia, would have been a declaration of war, and dragged the US into WW3. So, the second this news hit, Joe’s Handlers shuffled him to a room in a Bali and took this incredibly disturbing picture, of what looks like an old, confused man in a nursing home, being helped by a couple of male nurses.

New Indian Express reported that Joe Biden convened an “emergency” meeting of the Group of Seven and NATO leaders in Indonesia on Wednesday morning for consultations after NATO-ally Poland said a “Russian-made” missile killed two people in the eastern part of its country near the Ukraine border.

Biden really wanted this to be his big “war moment,” sitting there in his scuzzy size XS t-shirt, that he’s swimming in, with his weird wispy “mullet” hair. He thought it looked historical, but in reality, it looked like a confused old man being given directions on how to use a TV remote control.

But it turns out, it wasn’t Russia that did this, after all. It was likely Ukraine that did it because Zelensky is ITCHING to start WW3. This bum can’t wait for nukes to fly.

BREAKING: Poland's president says there is a high probability that the missile which landed in country's territory was fired by Ukrainian air defense systems

Here’s what popular right-wing Twitter account Catturd said about the photo: “No, Mr. President, that isn’t the TV remote, it’s called a smart phone. It’s way too complicated for you to use, so give that back and I’ll go get you some pudding.”

"No, Mr. President, that isn't the TV remote, it's called a smart phone. It's way too complicated for you to use, so give that back and I'll go get you some pudding." pic.twitter.com/YYY2Rt1eWA

I’m sorry, but this frail old man looks like he’s being kept alive with IV fluids and witchcraft.

Well, we know Joe Biden doesn’t know anything about social media. Clearly, he has some low-info, emotionally unstable Millennials running his Twitter account, but thanks to Hunter’s laptop from hell, we know he knows how to text. We’ve seen the endless streams of text messages where Joe, the “Great Crack Enabler” treats his 50+-year-old son like he’s 7 years old.

Although, in this photo, it does look as if the Handler is helping him, with whatever he’s doing… probably trying to spell a 3-letter-word, “WAR.”

“So if I push this button it launches more Ukrainian missiles???”

“Which number is Lawrence Welk on?”

“Why am I not surprised Blinken sits like a woman?”

“No Mr President, that’s not a scratch and sniff sticker.”

“Why is the president being photographed in a crappy T-shirt in what is clearly a meeting related to official duties?”

“Some of the people pulling the levers.”

“He can never be left alone”

“What’s really disgusting is his wife and staff know he is unfit to be the President! Yet, they do nothing! Evil!”

“These are the folks that raided Trump and came up with nothing. Never forget what they have done to this country.”

“I bet he called it a doohickey”

“I wonder if he can do anything without help.”

“Wow, he looks really frail and old. Why would they release this photo? lol”

“This photo does not instill confidence and security. It looks like the country is being run by a wafer thin old man”

“Is that Hunter’s old shirt from his crack days?”

“he really thought it was gonna be his “war moment” He had pudding instead, and went to bed, again”

Everything this frail dementia-addled man does is a disaster, yet, somehow, he and his failed, unpopular party keep winning. Weird how that happens, right? 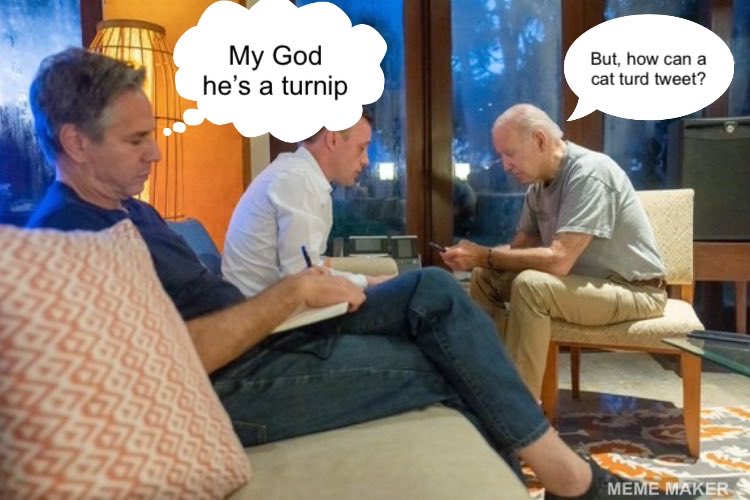