Elon’s Twitter is running pretty smoothly, at least from a user-experience point of view. I have seen no issues in terms of service, or the site actually running. The right-wing accounts who were still getting randomly suspended just a week ago, seem to have eased up as well and Elon has brought back a lot of folks who were unfairly suspended, which is great to see. Now, we have Trump’s account back, Project Veritas, Marjorie Taylor Greene’s personal account, and many, many others.

Of course, with that move, liberals are losing their marbles. The only way liberals are happy is if everyone who disagrees with them is silenced. And when that stops happening, and their little “safe space” bubble is popped, they lash out. And now, there’s word that Apple and Google may dump the Twitter app since the site is no longer a progressive hellhole. Not to mention, the guy who heads up Apple’s app store, just deleted his account.

Daily Mail is reporting that the head of Apple’s App Store deactivated his account on Twitter amid the possibility of tension between the Elon Musk-owned platform and the two companies that are the internet’s main gatekeepers: Apple and Google.

Phil Schiller, who also leads events for Apple, had been active on Twitter since 2008 and had over 200,000 followers. DailyMail.com reached out to Apple for comment on Schiller’s departure.

Twitter still plans to relaunch its paid subscription service, Twitter Blue, at a cost of $8 per month on Nov. 29.

Since most people access Twitter on iPhones or Android devices, this means that Apple and Google stand to profit if Musk’s revamped subscription service takes off.

Both tech companies take a cut of subscriptions purchased on their platforms. For Apple, it amounts to 30%, and for Google, it’s 15%.

Those fees amount to chump change for Google and Apple, but they could become a problem for Musk – as he slashes costs relentlessly by laying off more than half the company’s workers.

Just a few days ago, Musk tweeted that ‘app store fees are obviously too high due to the iOS/Android duopoly’ and previously he’s labeled them a ‘tax on the internet.

However, the bigger problem that sparks a clash between these companies is likely to be content moderation.

In recent weeks, users have said they’ve seen a dramatic increase in racist and anti-Semitic tweets – as well as far more scams – on Twitter.

According to Bloomberg’s Mark Gurman, Twitter has fired many contractors who worked on policing the deluge of tweets for misinformation and hate speech under the site’s rules and the executives overseeing this area have quit or been laid off.

If a war of words erupts between Musk and Apple CEO Tim Cook, for example, Apple could remove Twitter from App Store.

However, Musk could also direct Twitter users to sign up for Blue via the web – bypassing Google Play and Apple App Store entirely.

And speaking of Musk and his team, some new photos have come out, and at first glance, it looks like Elon’s new team, that’s “keeping Twitter alive,” is snowflake free.

I mean, there are no blue-haired girls, or men pretending to be women, so that’s a huge start.

Here’s a closeup of Elon’s crew. They all look like hard workers, who are there to do a job, not push progressive politics.

At least, that’s what we hope, right? 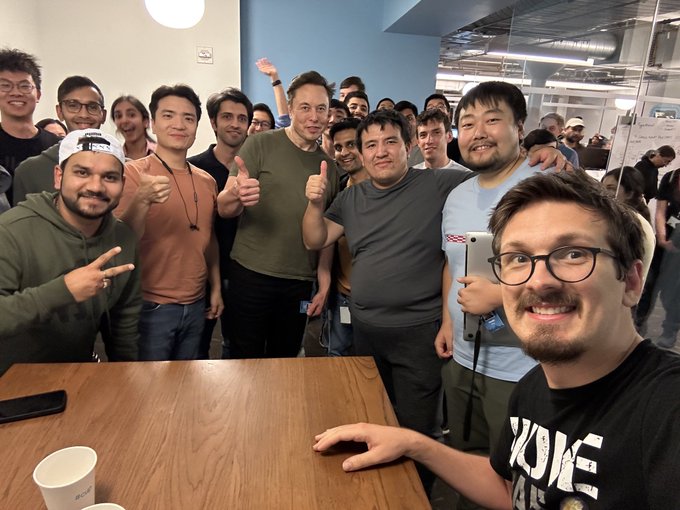 “The left LOVED twitter when it was their little trained monkey. Not so much since it ran away to join another circus!”

“I am sure Elon knows everything that’s going on.”

“I see a whole lotta employment visas, first, and second generation immigrants that are extremely greatfull to be standing on US soil.”

“Yeah, none of them look like unjustifiably self-righteous SJWs. Amazing.”

“In fairness there’s also a lady in that photo, back row, third from the left. And she looks like a happy, normal person, just like the rest. I don’t see a rainbow-haired [email protected] in the bunch. Very conspicuous by their absence….”

“A tweet I saw yesterday: Twitter is now running with 50 employees. Just what did the other 7,450 people DO?”

“The majority of those remaining at twitter look to be Asian. Wonder how many are HB1 visa holders?”

“There are ALOT of American born Asians in California”

Let’s hope the guy in front with the “Woke AF” t-shirt is being very sarcastic, otherwise, we might be in trouble.