A Ford electric truck owner is up poop creek without a paddle, and he’s 1000 miles from home. His name is Eric Roe, and he had a totally new type of nightmare experience at a charging station that I have not heard of yet. He was charging his truck at an Electrify America charging station when he heard a loud POP and it all went downhill from there. Roe owns a Ford F-150 Lighting  and after that POP he heard, he got out of his vehicle and quickly discovered that his truck was “fried” by the charger. But not just “fried.” It was destroyed.

This was his first tweet after the truck was ruined… as he says in the tweet, “I’m screwed.”

My @Ford Lightning bricked today at an @ElectrifyAm charger. I’m 1000 miles from home, the EA charger when black, and my Lightning won’t move. I’m screwed.

Eric kept the updates coming, including taking a pic of his truck being towed away. 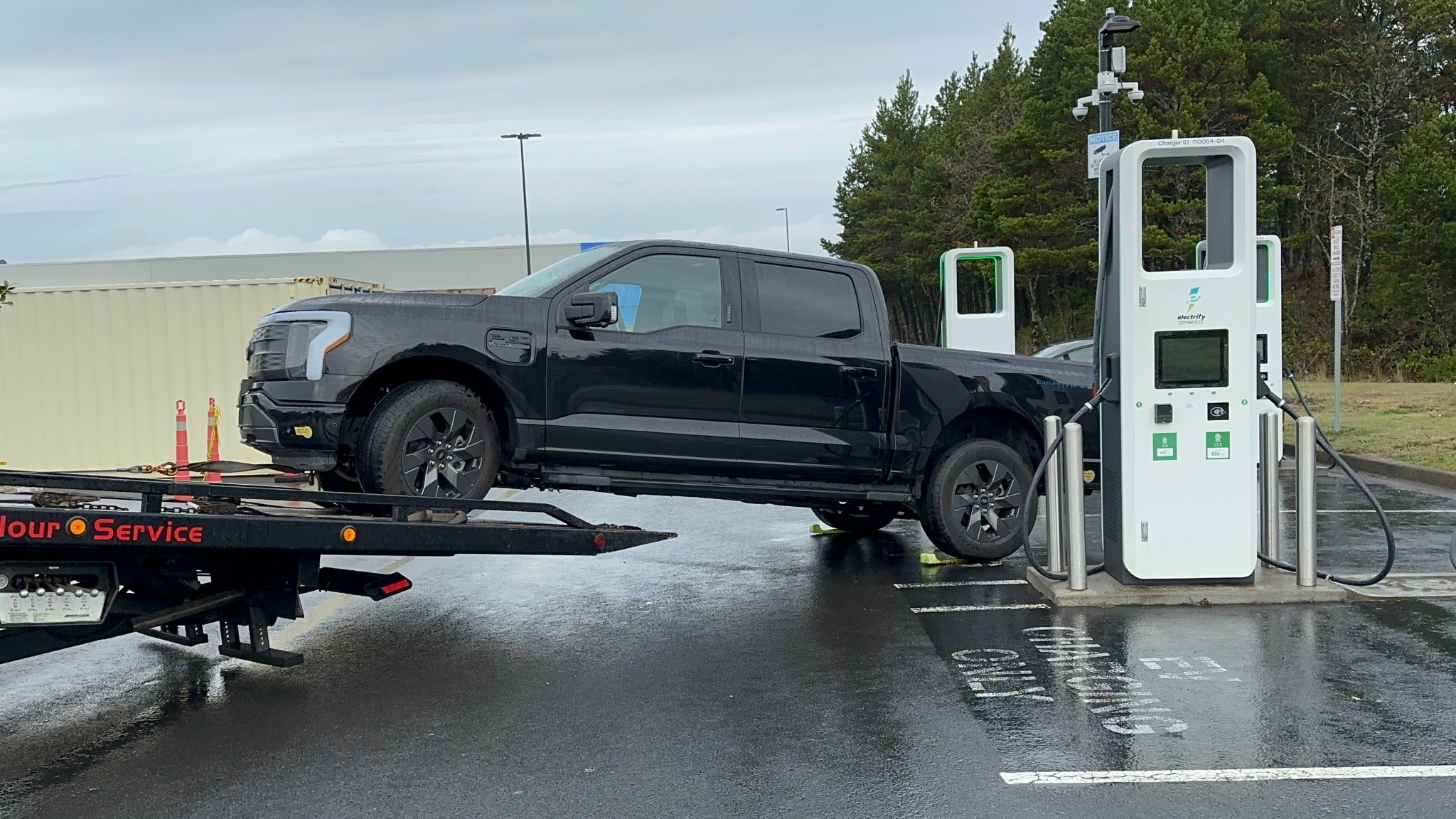 Here’s what Eric said about his experience:

My @Ford being towed away from an @ElectrifyAm charging station after the EA charger fried my truck.

Power Ford in Newport says they need to replace the 12 volt battery before they can diagnose, and it’s some sort of special battery and they don’t have an ETA. Then what??

Oh jeez, we all know how much those batteries cost, right? I hope Eric has a pile of cash he’s been waiting to burn through because I have a feeling this is going to cost a fortune.

I am going to say something that’s 100 percent true…

Going electric beyond inner-city commuting is a complete and total folly and it will never work, and this latest electric Ford truck experiment proves that.

How far can you tow a trailer with a Ford Electric truck before the battery dies?

As a matter of fact, it’s a downright disaster.

Here’s what one viewer said: When you actually account for a total recharge of the Lightning, you saved only $6. Regular gasoline, which would have been fine, would have cost you roughly $78 and took a couple minutes. A 75% charge cost you $27 which means a full charge would have run you $36…..ONE WAY. Once you pay to recharge again once you reached home base you would have had a total of $72 in recharge cost. Who here is willing to spend an additional 88 minutes of their life to save $6.

And others want to know what this would have looked like towing UPHILL in the Rockies?

Even worse, they imagined.

There are just so many issues going on with electric cars, not only the vehicle but the charging stations, too. Nevermind, that we don’t even have the infrastructure to support an onslaught of new electric cars on the road. But, even so, Dem politicians and their cohorts in the media just keep shoving this “green communism” down our collective throats.

Trust me, they don’t care if you’re stranded 1000 miles from home. These progressives just want to help their donors and supporters kick off their new multi-bazillion-dollar businesses.

If you want an electric vehicle, that fine but don’t force people into buying them. Just like the vaccine sh*uld be, personal ch*ice not a forced one.