Liberal Blue Checks on Twitter decided it’d be funny to change their name to “Elon Musk” and tweet vulgar, rude, and communist things. The trend started thanks to Food Network’s most radical and outspoken liberal, Valerie Bertinelli, who changed her name and began tweeting pro-abortion garbage and other left-wing propaganda under the name “Elon Musk.” Soon, tons of blue checks followed, and changed their names to “Elon,” even after being warned by Twitter to stop.

One of those people who didn’t stop, was un-funny TDS “comedian” Kathy Griffin, so Elon Musk suspended her account, permanently.

It wasn’t clear whether the suspension was permanent or a direct result of her mockery. It came as Musk announced that accounts that impersonate celebrities and other notables would be prohibited unless they’re labeled “parody.”

Going forward, any Twitter handles engaging in impersonation without clearly specifying “parody” will be permanently suspended

Twitter’s policy has always prohibited impersonation, but the immediate action is new.

Musk would appear to be the main beneficiary of his policy, which might seem to contradict his claim to be a “free speech absolutist.” Examples of suspensions for impersonating other people without the “parody” label were few.

In recent days, a wave of Twitter users changed their page titles to his and made statements intended to critique his libertarian outlook and tenure at the platform, which he controls after organizing a $44 billion purchase.

Griffin used her “Elon Musk” account Sunday to urge Americans to vote for Democrats in the midterm elections Tuesday to preserve abortion rights.

“I’ve decided that voting blue for their choice is only right,” she wrote as Musk. 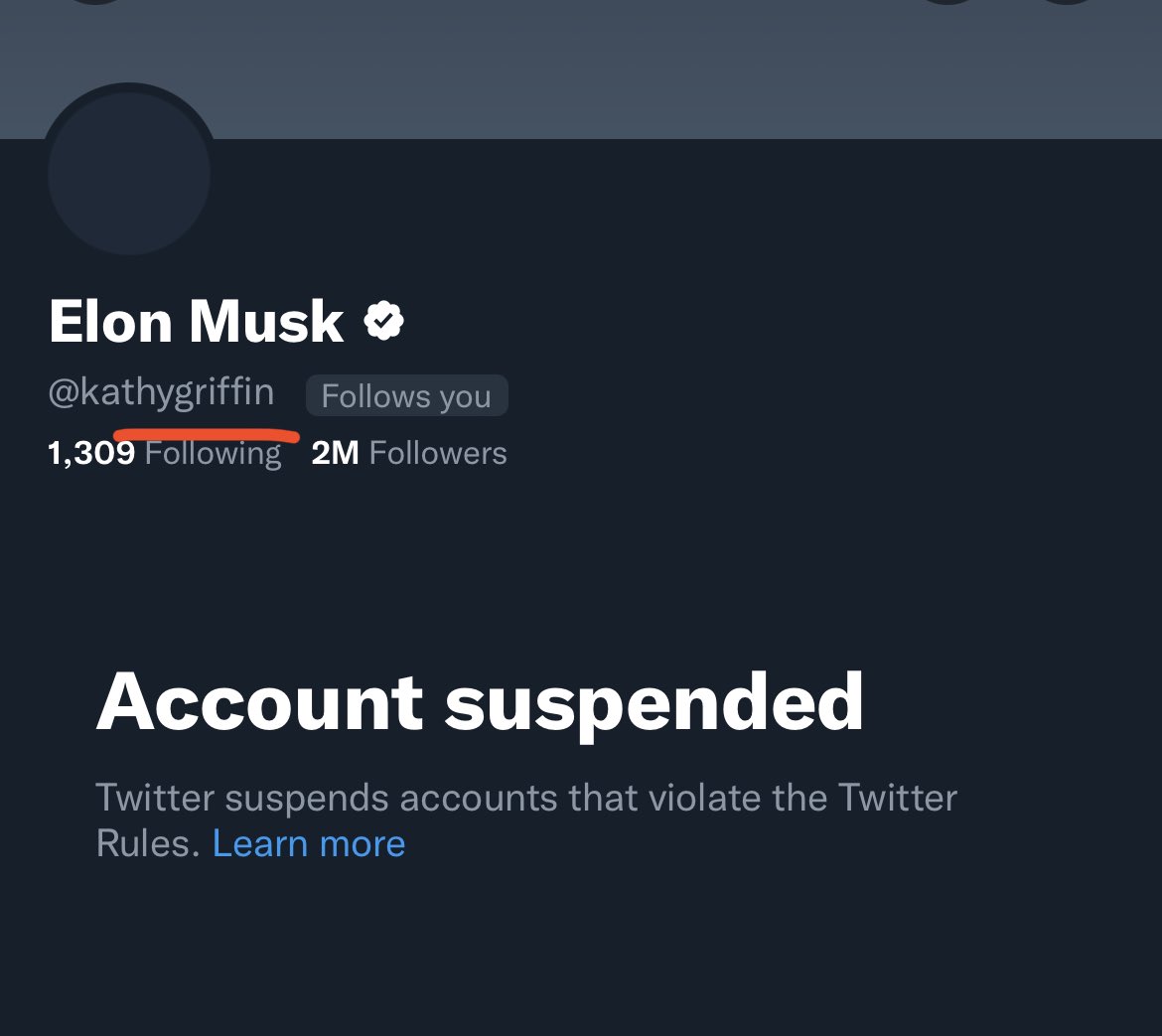 But sadly, that wasn’t the end of Kathy.

Newsweek reported that Kathy Griffin has been slammed for using the Twitter account of her late mother, after she was suspended from her own account for impersonating the platform’s new owner, Elon Musk.

After her account was suspended, Griffin started using the account of her late mother, Maggie Griffin, who passed away in 2020. The account, which had been inactive since 2019, was controlled by Kathy Griffin when her mother was alive.

She responded to Musk’s tweet about impersonators being banned by writing from her mother’s account: “I’m back from the grave to say… #FreeKathy #TipIt.”
As she resumed use of her mother’s account, the Suddenly Susan star tweeted “#FreeKathy,” a hashtag that she added to other tweets and one that was shared by a host of supporters, including Star Wars actor Mark Hamill.

Kathy Griffin also confirmed that she was the one using the account, as she wrote to journalist Kara Swisher, who counted herself among the star’s supporters, that she was “tweeting from my dead mother’s account. She would not mind.”

In what appeared to be an explanation as to why her account was suspended, she responded to a since-deleted tweet: “I honestly think it’s because it’s me, and because the tweets I was trying to write in his voice were pro democrats and had hashtags like #VoteBlueToProtectWomen and #voteblueand pro @BetoORourke etc.”

But while “#FreeKathy” moved its way up the trending list, showing what appeared to be widespread support for the TV personality’s account to be reinstated, she also faced backlash from a number of detractors for using her mother’s account.

It’s nice to see liberals get the same treatment conservatives have gotten for 6+years now.

Hope more of these TDS hate-mongers get suspended. The site will be much better without them.