The Paul Pelosi “hammer attack” went from full-blown media mania to locked down like Fort Knox, in no time flat. So, what happened? Well, the actual truth started getting out (thanks to NBC), so they had to shut the production down. And now that court proceedings are taking place, they’re doing everything they can to make sure nothing leaks out. Meanwhile, the drunken Pelosi duo are staggering around town, playing the roles of “heroes,” which we all know is a load of horse manure.

Paul “Hammer Time” Pelosi made his first public debut at the Kennedy Center recently. The Hill reported that Paul Pelosi attended the Kennedy Center Honors on Sunday wearing a hat and a single glove, in his first appearance in Washington, D.C., since he was attacked at home in late October.

The 82-year-old husband of Speaker Nancy Pelosi (D-Calif.) was attacked in the pair’s California residence by a suspect allegedly searching for the lawmaker. Paul Pelosi later underwent surgery for a skull fracture and injuries to his right arm and hands.

Paul Pelosi was at his wife’s side during the Sunday night event to celebrate this year’s Kennedy Center honorees: singer Gladys Knight, the band U2, actor and human rights activist George Clooney, composer and conductor Tania León, and Christian singer Amy Grant.

The Pelosis were seated next to Vice President Harris and second gentleman Doug Emhoff.

Paul Pelosi could be seen wearing a black brimmed hat and a black glove on just one hand as he stood to applaud during the ceremony.

“I would like to single out one member of Congress who has been, for more than several decades, really devoted to the Kennedy Center — and her husband of 60 years who’s here with us as well — Nancy Pelosi,” he said.

The Pelosis grabbed each other’s hands and raised them in a triumphant gesture during the applause.

So, if Paul is such a celebrated victim, why not show the video footage of what happened, and blast all the details of the story?

Well, I think we all know why. This trial will likely get the “Ghislaine Maxwell” treatment. We won’t hear or see anything about it.

The amazing investigative reporter Julie Kelly, who works at The American Mind, pointed out how scared they are about any info leaking out, which seems very odd, since this is a case that has already laid out the so-called “facts” as undeniable.

Boy, they sure don't want any of the evidence in the case against Paul Pelosi's attacker to be made public. Very strict protective order recently filed: pic.twitter.com/lwhMqtFdyb 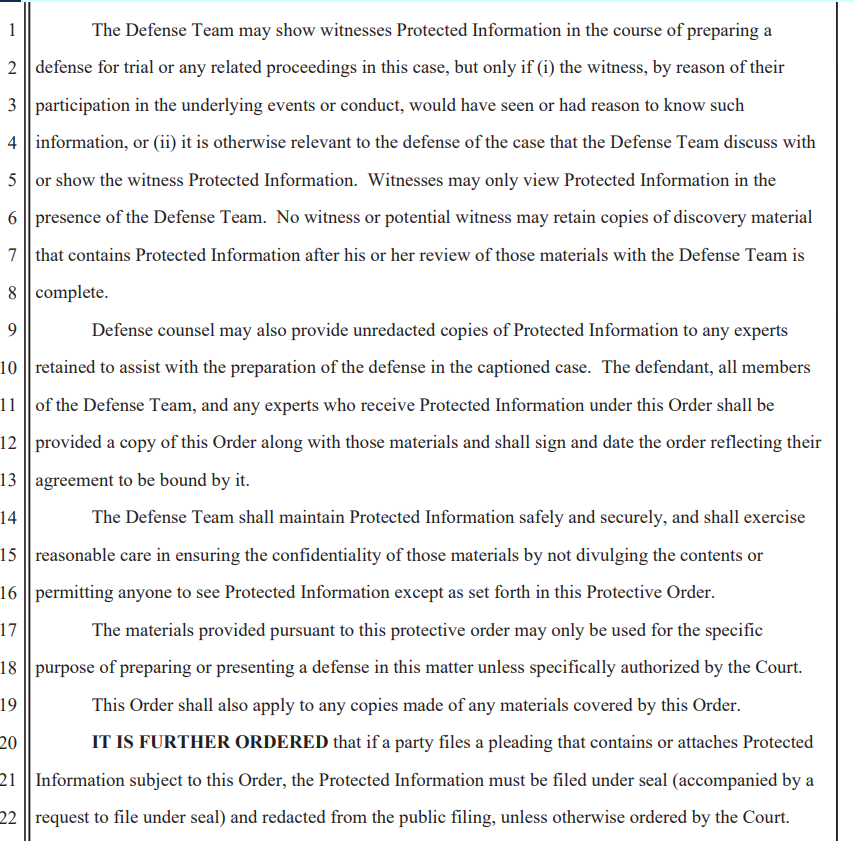 “Those that have been paying attention know the real story.”

“is it normal to limit parts of discovery so that the defendant is not allowed to see all of it??”

“Suspicious misuse of authority to cover-up the facts of the case. These oddities have continued beyond Miguel Almaguer’s suspension and removal of his news video by NBC. What are the Pelosis, FBI, Secret Service and DOJ hising from the public?”

“They are desperate for transparency on things like Trumps tax returns but when it comes to them Nada.”

“I think everyone pretty much knows what they are desperately trying to hide.”

“This makes me sick the elites truly operate by a different set of rules & laws than those of us who pay the tax bill!!!”

“It must be nice to be a member of the protected class.”

This poor guy will be sent away, never to be heard from ever again. He’ll die, clutching the secrets of what really happened that night.