Wow. This poor, pathetic PBS reporter didn’t stand a chance against the America First wrath of Kevin McCarthy… Yes, I said Kevin McCarthy. He’s morphed into this savage fighter who takes no 💩 and who stands up to the press unapologetically. I never thought I’d see something like this unfold in the GOP with somebody like Kevin, but let me tell you, this guy opened up a can of whoop-a** on this lady, and it’s one of the best things you’ll ever see. It all started over Kevin removing  two traitor, Schiff and Swalwell, from the Intel Committee.

Why it matters: It’s a controversial move opposed even by some of McCarthy’s caucus members and a stark escalation of an ongoing tit-for-tat with Democrats over committee assignments.

McCarthy vowed revenge after Democrats and a handful of Republicans voted to remove Reps. Marjorie Taylor Greene (R-Ga.) and Paul Gosar (R-Ariz.) from their committees in 2021.
McCarthy’s move comes despite opposition from some House Republicans.
Driving the news: McCarthy announced the move in response to House Minority Leader Hakeem Jeffries’ (D-N.Y.) letter over the weekend pressing for Schiff, who was the top Democrat on the panel, and Swalwell to be kept in their seats.

“I appreciate the loyalty you have to your Democrat colleagues. … But I cannot put partisan loyalty ahead of national security,” McCarthy wrote.
“As such … I am hereby rejecting the appointments of Representative Adam Schiff and Representative Eric Swalwell to serve on the Intelligence Committee.”
The backdrop: McCarthy told reporters during a press conference on Tuesday that he would forge ahead with removing the two lawmakers over Swalwell’s association with a Chinese spy and Schiff’s promotion of the Steele dossier.

What’s next: McCarthy is expected to hold a floor vote on kicking Rep. Ilhan Omar (D-Minn.) off the Foreign Affairs Committee, though that could face opposition from his own party.

Reps. Nancy Mace (R-S.C.) and Victoria Spartz (R-Ind.) have both said they oppose kicking Democrats off their committees.

Adam is crying about this move and it’s wonderful to see. 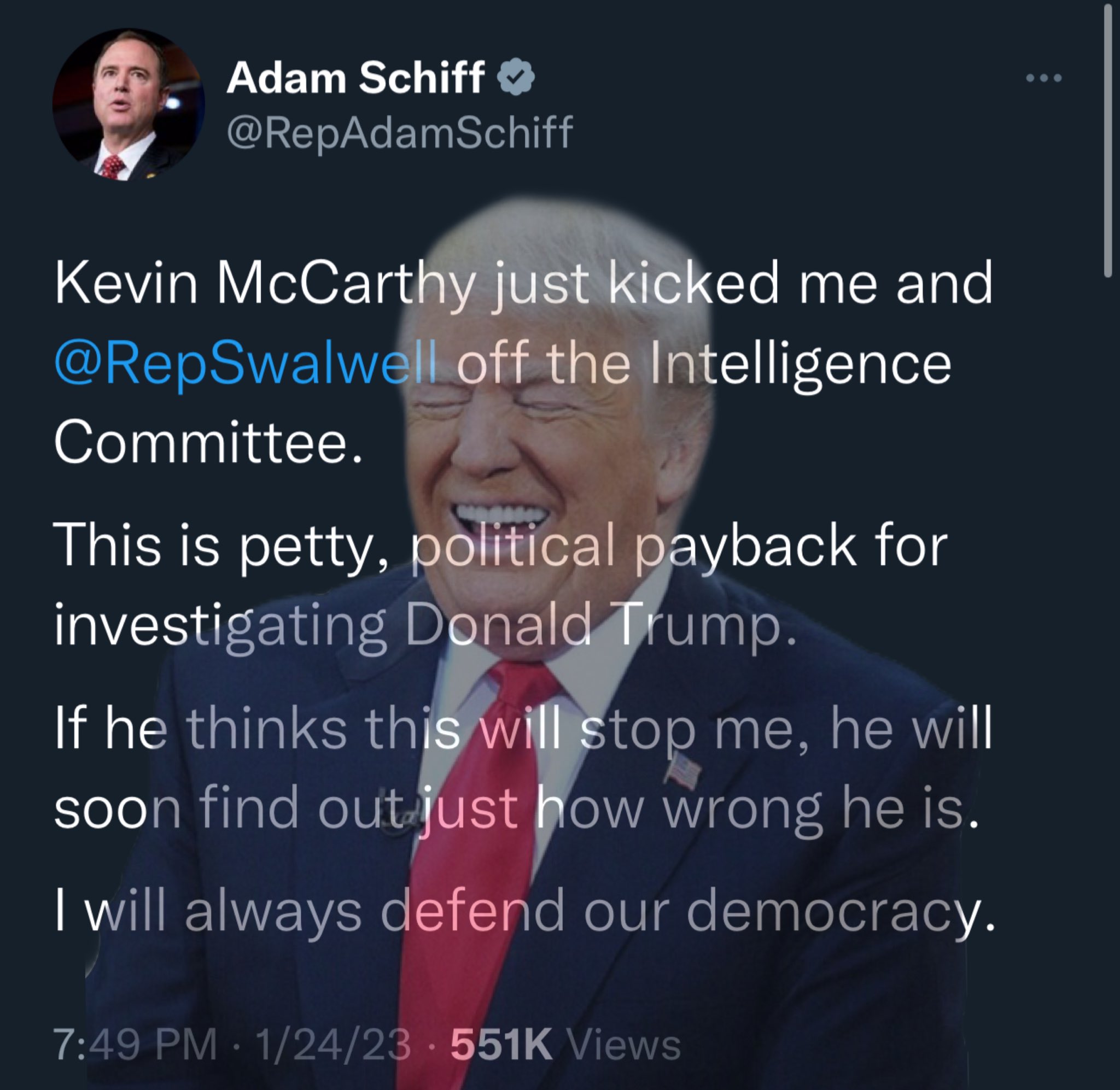 Now, bask in the glory of this amazing clip, where Kevin puts a liberal, fake news-peddler through a wood chipper.

Holy shit. Kevin McCarthy just absolutely destroyed a reporter who questioned his decision to remove Schiff and Swalwell from the intel committee.

Okay, now THIS is the Kevin we’ve all been hoping and praying for.

Now, I am not saying that I am “sold” that he’s going to be a fighter 24/7, but I am very optimistic, and will watch eagerly with a fair bot of caution.

How about you? What do you think about Kevin 2.0? Has Marjorie Taylor Greene gotten through to him, finally?